A buzzer-beating three-pointer at the end of the third quarter set the tone for a fourth-quarter McCreary Central comeback over Somerset Thursday night.Their first win over the Briar Jumpers since 2010. 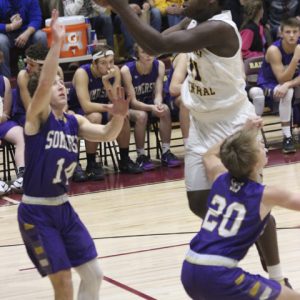 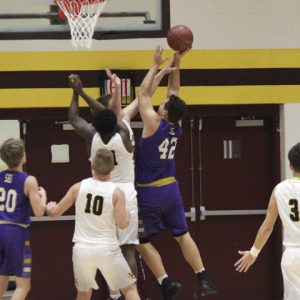 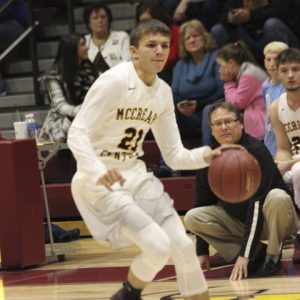 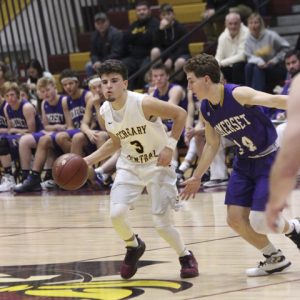 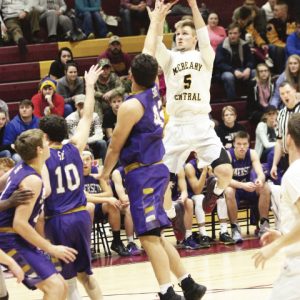 Photo by Chris Hollis Devin Strunk had a big night, hitting 6 three-pointers to help propel the Raiders to a win over Somerset Thursday.

Devin Strunk, who led both squads with 23 points, hit six treys in the game, including a big one at the end of the third period that pulled his team to within one-point of the lead, 47-16.

Strunk, who went 6 of 9 from beyond the arc, helped the Raiders overcome a shaky second quarter where poor shooting allowed Somerset to take a 10-point lead at one point and threaten to run away with the game.

Coach Jimmy Voight, who made his coaching debut at home against the Jumpers, said halftime adjustments played a big role in the turnaround.

“It was a big win for us,” Voight said after the game. “A lot of the kids playing for us right now haven’t had a lot of success playing at the varsity level. They have a new coach, and we are still in a learning phase – me learning them, and they are learning me and my system.”

“We had to do some things in the first half that I don’t like to do. I’m pretty much a man-to-man defense coach, but we had to play some zone because I knew they would try to play inside and get (Devon) Hamilton and (Ryan) Jones in foul trouble. What we had to do was buy some time and shorten the game some.”

“The thing I was disappointed with at half time was we missed four or five ‘bunnies’ right underneath the goal. We were down 8 at half, and if you get those points, we would be deadlocked. The talk at halftime was about finishing shots, we couldn’t afford to leave points on the floor.”

“To our guys credit, in the second half, they came through.”

The Raiders played without Hunter Jones, who was sidelined with an ankle injury. Coach Voight thought his absence played a role in some of the miscues in the game.

The Raiders took a 3-point lead to open the second quarter, but Somerset would go on a 12-0 run that led to an 8-point lead at the break.

Coming out of the half the Raiders played stronger and started to fight their way back in to contention.

With 6:19 left in the game, Ryan Jones hit a pair of free throws that would give the Raiders the lead for good. Strunk followed up with his fifth trey of the night following a Somerset turnover to extend the lead to 4, but the Jumpers would not go quietly. Somerset’s Kross Grundy answered with a three-pointer, but John Cash answered with a trey of his own the next time down the floor.

A turning point came with just under three minutes to go in the final quarter.

Somersets’ Collin Hartman went to the line for a pair of bonus free throws with his team trailing by 3. Hartman hit the first, but missed the second, but the Raiders were unable to come away with the rebound. In the process of scrambling for the loose ball, Hartman was fouled again and went back to the line for two more charity shots. Hartman would miss both and the Raiders would make them pay.

Strunk hit his sixth trey of the night with 3:02 left for a 63-56 lead, and forcing a Somerset time out.

Coming off the time out, Somerset put on the press, forcing a McCreary turnover. Kross Grundy was fouled on the play, but missed both free throws.

Hamilton gave the Raiders a 10-point lead after fighting through a high-pressure Jumper defense with 1:58 left, scoring a basket and adding one on a free throw.

Somerset was forced to foul down the stretch in an effort to keep time on the clock, but the Raiders would hit 7 of 10 to preserve the win.

Strunk led both teams in scoring with 23, followed by Hamilton with 18 plus 10 rebounds, Ryan Jones with 14, John Cash with 10, Nick Longmire with 4 and Brandon Troxell with 4.

The Raiders followed the win with a 51-33 victory over Williamsburg Saturday to improve their record to 4-1.

After the break the Raider will play in the Pine Mountain Classic in Pineville, then have two District road games – at Southwestern on January 5 and at Wayne County on the 9th.