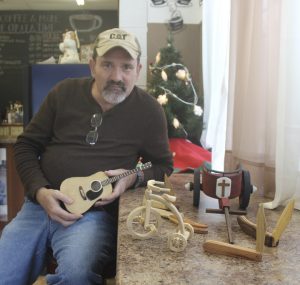 Danny Clark of Marshes Siding has an innate talent for using the scroll saw to make a variety of crafts. His handmade tricycles, guitars, and carts are unique and well liked by the public.

As a child and young adult, fifty-four year old Danny Clark of Marshes Siding really wasn’t the “craftsy” type.  He didn’t draw or paint.  He didn’t do woodworking.  He whittled a bit, but even his whittling was just the normal, rhythmic slicing away of wood from a stick or block.

His early life gave no indication he would someday be creating beautiful scroll saw art.

Clark had always wanted to create with a scroll saw but just never took the time.  He dabbled a bit with it in the 1990s, but went dormant until about fifteen years ago when he decided to give his scroll saw another more focused try.  Now for the last ten years, Clark has become passionate about creating his tiny, wooden wonders.

Clark, a self-taught artist who seemed to ‘just click’ with making scroll saw creations, gets ideas on his own but also looks for ideas by going to the library, scouring the internet, and checking out flea markets and other such places.

Although he sometimes uses patterns to make signs, etc., Clark is most likely to ponder out his own designs for toys and miniatures. He recalled a crafter friend seeing one of the tiny wagons he makes and asking which pattern he used.  Clark smiled and replied he had used no pattern.

Drawing sketches on paper or directly on wood, Clark plans out the parts needed to create small wooden wagons, tricycles, carts, guitars, and other assorted contraptions.   He likens his art to building a house from the ground up.

“It’s also like a puzzle,” Clark added.  “You cut out the pieces and then put them together.”

Clark’s tiny tricycles are one of his signature works. 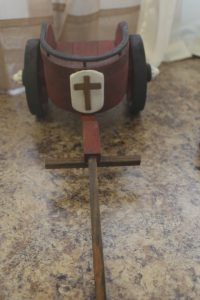 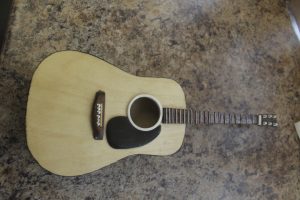 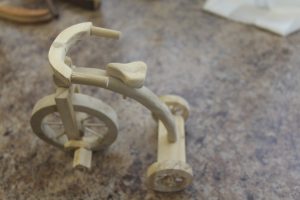 Danny Clark of Marshes Siding has an innate talent for using the scroll saw to make a variety of crafts. His handmade tricycles, guitars, and carts are unique and well liked by the public.

“Someone suggested I make one,” Clark recalled.  “I thought and thought, and then it just clicked into place!”

It generally takes two to three days for Danny to make one of the tricycles.  The wheels usually take longer to make, and depending on what is desired, Clark even makes tiny tricycle pedals that turn.

Clark, who sells his crafts directly to those wishing to buy, would someday like to open his own shop.  Ideally, he would like a small place to work and house necessary tools (scroll saw, drill press, hole saws, and sander) and surround himself by his work for others to see, appreciate, and purchase.  In addition to the tiny wooden wagons, tricycles, chariots, knives, and guitars, Clark also makes unique wooden pumpkins, holiday signs, plaques, and sausage grinder lamps.

Clark works with all types of wood but prefers pine.

“I use some cherry and walnut,” Clark shared.  “But 95% of what I do is from pine.  Pine is my favorite because it’s easy to work with.”

Clark’s pride in the quality of his craftsmanship is evident.

“It gives me a feeling of accomplishment to see what I can get done,” Clark said with a smile.  “My brother says I’m too much of a perfectionist but if something is not right with my work, I want to redo it.”

As further testimony to the degree of quality he demands from his work, Clark added.

“Everybody says my work is different.  I take my time, and I take pride in what I do.”

Pride.  Quality.  Talent.  Who could expect more from a McCreary County artisan?