After nearly four months on the run, Jimmy Troxell is once again in custody when two McCreary County Sheriff’s Deputies apprehended the fugitive late Saturday night. 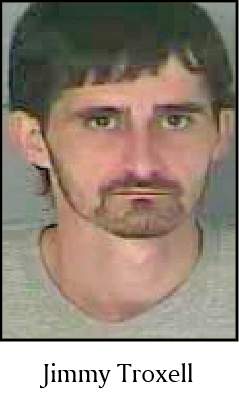 After nearly four months on the run, Jimmy Troxell is once again in custody when two McCreary County Sheriff’s Deputies apprehended the fugitive late Saturday night.

Troxell, 28, had been avoiding capture since his August 23rd escape from a transport detail. He had reportedly been spending time in several residences in both McCreary and Pulaski counties, as well as hiding in the woods in the Parkers Lake and Sawyer area.

After receiving a tip as to the location where Troxell was reported to be staying Deputies Odell Smith and Dustin Ridner went to a residence on Highway 90 in an attempt to bring the subject in.

With Deputy Ridner positioned at the back door, Deputy Smith made entry through the front where he saw Troxell emerging from a bedroom.

Troxell ignored a command to stop, and began to run. Deputy Smith deployed his Tazer, but the subject tore the probes free and ran through the house toward the back door.

When he attempted to exit, Deputy Ridner tackled Troxell, who continued to struggle with the officer, who contained him until he was able to be subdued and placed in custody.

Troxell was booked in to the Leslie County Detention Center on several outstanding warrants, including additional charges such as fleeing/evading and a September indictment stemming from his escape.

Troxell was indicted by the McCreary County Grand Jury on Escape 2nd Degree charges, which is considered a Class D felony and carries a possible jail sentence of one to five years if convicted.

Troxell was originally set to appear in court on August 23rd on three charges of possession of a forged instrument and four charges of theft by deception/ cold checks, when he escaped.

Troxell was a passenger in a transport van with other prisoners set to appear in court on that day.

When the van parked by the sally-port at the McCreary County Courthouse, and the prisoners were getting ready to exit the vehicle, Troxell reportedly bolted from the side of the van and ran up the rocky embankment and past the law offices across the street.

A massive manhunt was launched that day after several reported sightings, but officers were unable to locate him.

Throughout his four months on the run, Troxell reportedly came close to being captured on multiple occasions, but the slippery suspect had either avoided pursuers or was able to leave the scene before officers arrived.

Billy R. Goodin, 36, was also arrested during the incident and charged with hindering prosecution and apprehension.

Jackie Troxell, 24, was also taken in to custody on parole violation charges.

Additional charges may be pending.