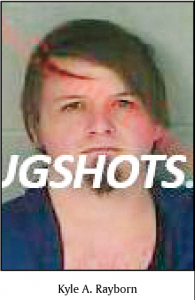 A 22-year old Georgetown man may be facing serious charges after he allegedly attempted to lure an underage girl to his motel room last month.

The case began around 8:17 p.m. on December 23rd when a family member alerted McCreary County 911 that a 14-year-old girl had gotten in to a vehicle with a man whom they believed was an online predator.

With a description of the vehicle and a possible direction of travel obtained officers from the Kentucky State Police and McCreary County Sheriff’s Department began looking for the suspect.

20 minutes after the initial call, Trooper Frost pulled over the suspect in front of Kroger and found the minor in the vehicle with Kyle A. Rayborn.

Rayborn was arrested on various traffic offenses and OUI, while a search of his motel room also led to possession of marijuana and drug paraphernalia charges.

Kentucky State Police Detective Billy Correll stated a search warrant was conducted on Rayborn’s phone and other electronic devices, and those have been sent to a forensic lab for testing and evidence gathering.

The child was safely returned to her family.

The investigation continues and possible additional charges are pending against Rayborn.