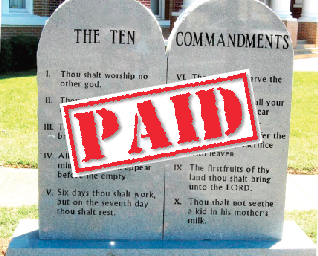 Last month McCreary County Judge Executive Doug Stephens made the final payment of a debt that will finally put the long-standing 10 Commandments case to rest.

While Pulaski County was able to take a one-year loan to settle the debt, McCreary’s financial conditions made it unable to make such a commitment, so a longer loan was sought to satisfy the bill.

The first of the two quarterly payments of just under $13,000 were made entirely from donations from private citizens and churches, but those contributions dried up soon afterwards.

Over the past five years donations continued to trickle in, but the majority of the debt was paid using money from the General Fund.

Judge Stephens stated a total of $43,873.62 was received in private donations over the course of the repayment, meaning approximately $193,000 of the bill came directly from the General Fund.

Both McCreary and Pulaski counties were co-defendants in the original suit that ultimately reached the United States Supreme Court.

The case originated in 1999 when the American Civil Liberties Union sued McCreary and Pulaski counties for posting the religious documents in their respective courthouses. Both entities moved to amend their displays, removing any “religious taint” by adding secular and historical documents, but it did not appease the ACLU.

The Liberty Council took up the cause for the county governments, first in U.S. District Court in 2003. The Judge in that hearing issued an injunction, barring them from displaying the documents. The ruling was upheld in the Sixth Circuit Court of Appeals, then moved to the U.S. Supreme Court in 2005.

In 2010 the Supreme Court passed on hearing another appeal on the case, ending the legal fight, but starting the call to pay the bill.

Federal law allows winning parties in civil-rights cases to recoup their legal fees from the losing side.

The American Civil Liberties Union hit each county with a bill for over $228,000 to cover attorneys’ fees and interest associated with the case.