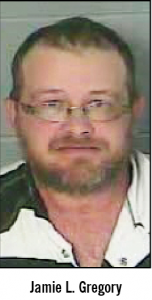 A Stearns man is facing serious charges after he allegedly raped and impregnated a 13-year old child.

According to the citation the mother of the girl contacted the State Police Detective after she discovered the child was pregnant.

The victim confirmed to the Detective that she had engaged in intercourse with Gregory at his camper located near Clark Hollow Road some time between August and the end of October. Text conversations between the suspect and victim reportedly confirmed the encounter, with Gregory allegedly stating he regretted committing the act.

Gregory was arrested and lodged in the Leslie County Detention Center under a $25,000 cash bond. An arraignment was set for today in McCreary County District Court.

Kentucky Revised Statute 510.050 defines Rape 2nd Degree as: “Being eighteen years old or more, he engages in sexual intercourse with another person less than fourteen years old.” The offense is a Class C felony and carries a possible jail sentence of five to ten years if convicted.