As new Director of Emergency Services, McKinney makes sure County is prepared for disaster 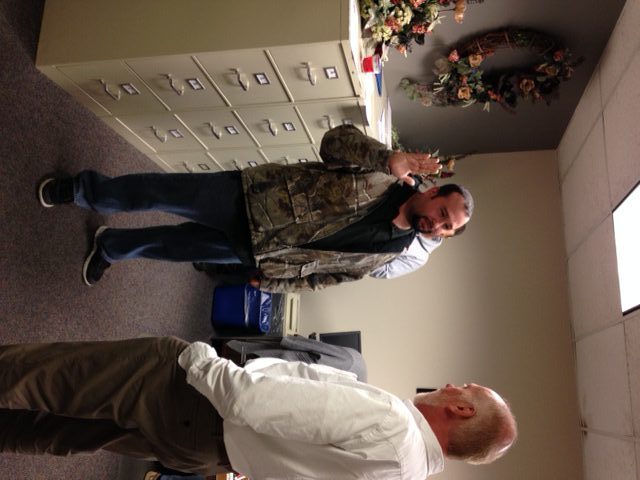 McKinney, who began working in emergency services in Georgia in 2006, began his McCreary County career by working at the jail from 2010 until its closing.  He then provided jail transport before moving to 911 dispatch in 2013.  McKinney remained at 911 until assuming his current position with McCreary County DES.  He also serves as a board member on the McCreary County Rescue Squad and has been a member of the Whitley City Volunteer Fire Department since 2012.

As the director of McCreary County’s DES, McKinney is responsible for managing the safety of the entire County.  His job description includes planning, revising and updating McCreary County’s emergency operations plan (EOP) as needed and staying current and prepared in regard to the County’s risk assessment (severe weather, railway accidents, etc.).  He is also responsible for securing funds through grants to improve services and offset the cost of emergency operations.  One of his most important responsibilities is serving as a liaison for getting necessary help from outside agencies if a disaster hits McCreary County.  McKinney also attends monthly Fiscal Court meetings as a department head to update the Court and public and answer questions concerning local emergency management.

McKinney is available to investigate and provide assistance when McCreary County citizens notify him of large chemical spills affecting highways or streams (water), illegal dumps, illegal burns, and other hazardous situations.  He can be reached at the McCreary Emergency Management phone number, 606-376-3770 which automatically forwards to his cell phone for twenty-four hour service.

By providing information from local flood plain maps, McKinney can provide assistance to those in need of flood zone information for banking and insurance purposes when purchasing land.

Looking forward, McKinney hopes to obtain grants to update equipment for the Rescue Squad and offset local costs for emergency management as a whole.  He will be reviewing and updating the County’s EOP along with assisting in the formation of a committee of lead emergency responders to work on better coordination of all departments in the event of an emergency.

“The establishment of such a committee will let everyone know the boundaries of local emergency responders,” McKinney remarked.  “It will help us identify situations needing outside assistance if necessary.”

As director, McKinney is eager to work side by side with all five fire departments, the local Rescue Squad, Emergency Medical Service, and McCreary County Sheriff’s Office.   In addition, he wants the public to have a better awareness of emergency management.

“I’d like for the public to have a better understanding of emergency management and our purpose in the County,” McKinney remarked.  “Anyone who has questions or concerns in regard to local emergency management can call our number at 376-3770.  If for some reason I don’t know the answer, I will find the answer.”