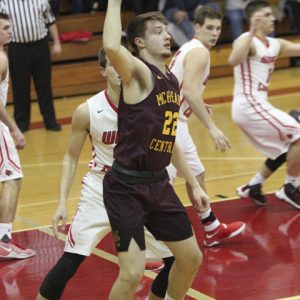 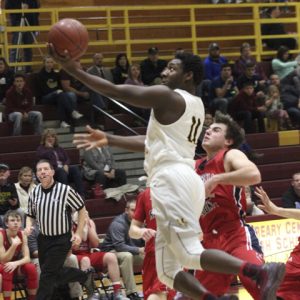 Photos by Chris Hollis Devon Hamilton drives to the basket in the win over Russell County. 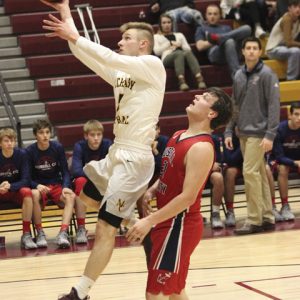 The McCreary Central Raiders recovered from a Monday loss at Wayne County with a 70-61 win over Russell County Tuesday night.

McCreary, led by Devon Hamilton with 26 points and 13 rebounds, and Hunter Jones’ 23 points, held off a late charge by the Lakers for their 10th win of the season.

The Raiders led by 12 at the end of the third quarter, but Russell County played aggressive in the final period, disrupting the McCreary offense – forcing poor shot selection, and exploiting mis-matches on defense to make the game tight down the stretch.

In the closing minutes the Raiders were patient, playing a stall game to force the Lakers to foul. McCreary went to the free throw line 8 times in the fourth quarter, hitting 10 of 13 attempts to preserve the lead and secure the win.

The Raiders are back in action Thursday night when they will host Barbourville, and on Saturday when they take on Garrard County in the Hall of Fame Classic hosted by Southwestern.

The Raiders game verses Southwestern, which was cancelled last week due to weather, has been rescheduled for January 19.

In other hoops action Tuesday, the Lady Raiders earned their fourth win of the season with a 44-43 win over Bell County.

The Lady Raiders will host Somerset Friday night and Whitley County next Tuesday. Their game against Southwestern has been rescheduled for January 27.