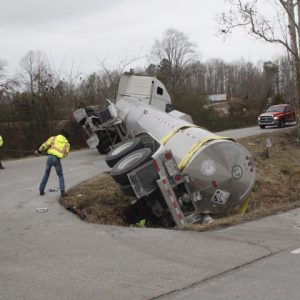 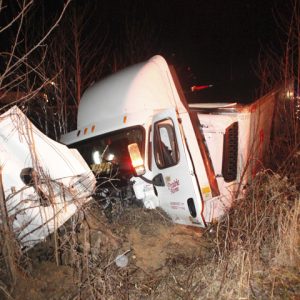 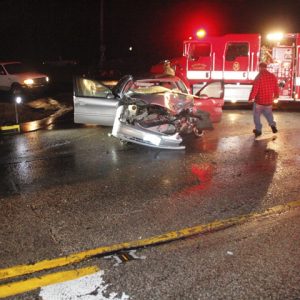 Two accidents involving tractor-trailers caused portions of U.S. 27 to be shut down for periods of time Tuesday.

The first occurred Tuesday morning when a tanker truck delivering what was described as liquid dye to the McCreary County Water District plant off Wiborg Loop Road overturned as it attempted to make a hairpin turn on to the southern-most entrance to the road.

Unlike a similar incident a few years ago, the potentially corrosive liquid did not spill, which would have caused a hazardous condition in the area.

Workers shut down a portion of the highway while the tanker was righted.

The second incident happened later that evening around 9:30 p.m. in Revelo when a semi trailer hauling milk was traveling southbound on U.S. 27.

According to witnesses, a Silver Ford Taurus ran the red light at the intersection of the highway and Appletree Road while attempting to make a left-hand turn. The vehicle entered the path of the semi, which struck the car and proceeded forward on the wet road before crashing into the wooded ditch line in front of Papa’s Pizza.

The Whitley City Fire Department and McCreary County EMS extricated the driver of the big rig, identified as Allen Shepherd of Somerset, who was transported for medical attention.

The driver of the car, identified as Jackie Hiely, and a passenger, were also transported.

Due to fuel leakage from the semi Hazmat Crews and a team from the Environmental Protection Agency responded to the scene to conduct a clean-up of the site.