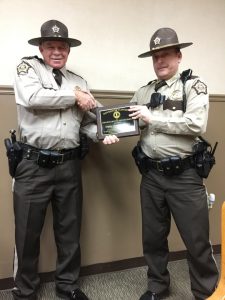 Sheriff Catron nominated Deputy Horne for this award in November 2016 which covered the enforcement period of October 1, 2015 thru September 30, 2016.

Governor Matt Bevin awarded Deputy Horne this prestigious award on December 13, 2016. This award is part of the Kentucky Transportation Cabinet’s yearly recognition of law enforcement officer’s efforts across the state that have saved lives through their extraordinary efforts to reduce alcohol and drug-impaired driving.  Deputy Horne made 38 of the 68 driving under the influence of alcohol/drugs arrest for the Wayne County Sheriff’s Office during the award period.