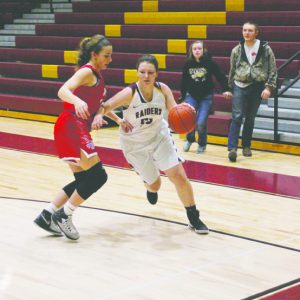 . Brooke Sluder drives the baseline against a Lady Colt defender. 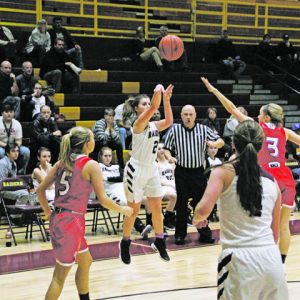 Photos by Greg Bird Ally Anderson puts up a shot against West Jessamine.

The McCreary Central Lady Raiders are suffering through a rough patch, dropping their last five games in a row and falling to 4-15 on the season.

Tuesday night, against West Jessamine, the Lady Colts jumped out to a 10-point lead by the end of the first quarter and were able to hold off the Lady Raiders the rest of the way. The Raiders were hindered by illness  and foul trouble. One usual starter was out due to illness and two starters drew early fouls – forcing Coach Todd Waters to go to the bench, which played into Jessamine’s favor.

The Lady Raiders started strong, holding a one-point lead late in the first quarter, but the Lady Rebels closed out the period on an 11-0 run – grabbing the lead for good. Boyle was able to maintain and grow their advantage the rest of the way, eventually winning – 60-40.

The Lady Raiders host Southwestern Friday night at 7:30 p.m., Clinton County (1:30 p.m.) on Saturday and wrap up their 6-game home stand on Monday when they host Knox Central at 7:30.