The Raiders gave everything they had for three quarters and it was working. 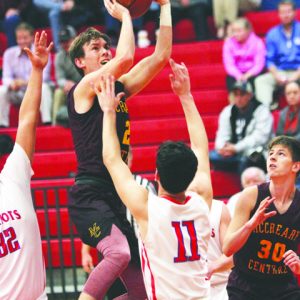 Photos by Chris Hollis Hunter Jones puts up a shot against Lincoln. 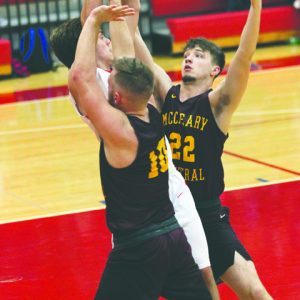 Photos by Chris Hollis Brandon Troxell and Ryan Jones double up on a Patriot player. 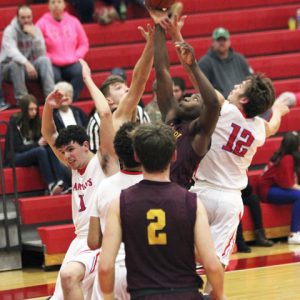 Taking on the Southwestern Warriors Thursday night, McCreary was able to slow down the high-powered Southwestern offense and play even with the District rivals, until foul trouble cost the Raiders and allowed their foe to pull away at the end.

Southwestern would win the matchup 76-59, but the game was much closer than the score indicates.

Southwestern entered the game with a 17-2 record, but it didn’t seem to bother McCreary.

Over the first three quarters of play the Raiders never trailed by more than 5 points, and held the lead several times as the Warriors struggled starting out.

When McCreary was patient on the floor things worked in their favor. But, when they rushed things didn’t work out in their favor – more often then not.

Turnovers prevented the Raiders from capitalizing on many opportunities, and they struggled with defensive rebounds, allowing the Warriors too many second-chance shots at the basket.

Southwestern missed their first four shots from the floor, and hit only 2 of their first 9, allowing the Raiders to take an early 12-5 lead before the Warrior offense started to wake up. The fast start was spurred in part by four baskets from Brandon Troxell, who scored the Raiders’ first 8 points in the game.

Even then McCreary fought hard and held a 4-point lead with less than two minutes left in the half. The Warriors went on a 9-0 run to erase the deficit, but Devon Hamilton hit a shot with 3 seconds left to cut the lead down to 3, 31-28 at the break.

McCreary opened the second half on a 10-2 run, taking a 5-point lead with 3:33 left in the period, but foul trouble was starting to take its toll.

With about 2 minutes left in the period, Ryan Jones fouled out on a controversial charge call, his second of the game. That moment seemed to be the turning point as Southwestern would hit a trey after the play; then follow up with another basket off a steal to take a 44-40 lead into the final quarter.

The Warriors would take control of the game in the final 8 minutes, outscoring the Raiders 32-19 down the stretch.

The Raiders were led by Devon Hamilton with 25 points, followed by Hunter Jones with 14, Brandon Troxell with 8, Ryan Jones with 4, John Cash and Nick Longmire with 3 and Tyler Strunk with 2.

The Raiders followed with a 80-72 loss to East Jessamine in the Remy Grace Classic on Saturday and a 76-38 loss to Lincoln County on Tuesday – their fourth loss in a row after starting the season 12-4.

Tonight McCreary travels to Lynn Camp, and will return home on Tuesday to host Rockcastle County.