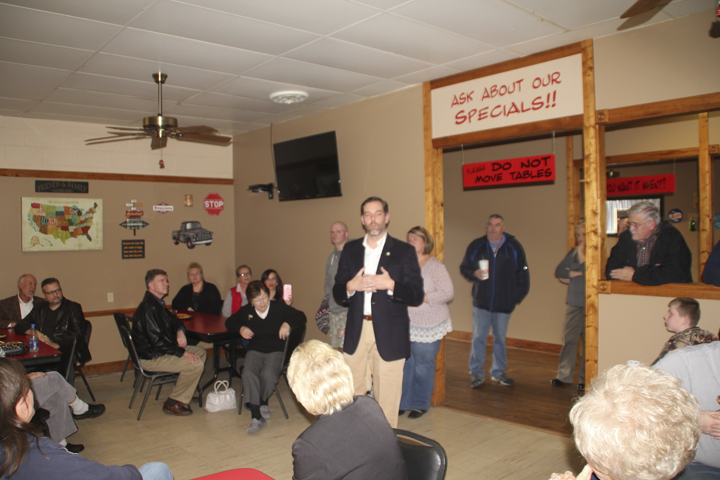 Photo by Greg Bird
Senator Max Wise held a town hall meeting at Papa’s Pizza in Stearns Friday to speak to citizens about what is going on in Frankfort.

Senator Max Wise paid a visit to Papa’s Pizza in McCreary County Friday afternoon to meet with his constituents as part of his annual town hall meetings across his District.

Wise, entering his second term as Senator for Kentucky’s 16th District, offered a brief run down of what the Kentucky Legislature has already accomplished to start the new legislative season, and what citizens can expect their elected officials to be working on in the coming weeks.

“We had a fast and furious week in the legislature,” Wise stated. “I think we did what the voters wanted us to do – get to work.”

The Senator highlighted the passage of right-to-work legislation, the repeal of prevailing wage requirements on government construction and two pro-life bills.

On the docket for the future this session the Senator noted work is being done on ways to allow local school districts decide on the use of Common Core, charter schools in urban areas, religious freedom in schools, tax and pension reform and defunding parts of Planned Parenthood.

Wise then took questions from the audience, listening to concerns over pensions, drugs and the jail situation in McCreary County. Wise informed the audience the Legislature is very serious about pension reform and drug issues in Kentucky. As for the jail issues, Senator Wise said while it is a local government issue, he promised to do what he could to help find a solution.