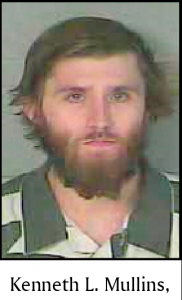 A Huntsville man has been arrested for his alleged role in the death of 40-year-old Gary L. Roberts, in Pine Knot last Wednesday night.

Detectives learned that Roberts was last seen leaving his residence on Highway 1651 with Kenneth L. Mullins, 25, in a pickup truck and traveling at a high rate of speed.

A short time later Roberts’ body was found near Century Lane and was pronounced dead at the scene by McCreary County Coroner Tim Corder.

A warrant for Mullins arrest was obtained and he was apprehended a short time later in Oneida, where he reportedly admitted to being with Roberts that evening.

An autopsy was performed with preliminary results indicating Roberts’ injuries were consistent with blunt force impacts.

Mullins was lodged in the Leslie County Detention Center on a charge of Manslaughter 1st and speeding.

According to Kentucky Revised Statute 507.030, manslaughter 1st degree is defined as: “With intent to cause serious physical injury to another person, he causes the death of such person or of a third person,” and is considered a Class B Felony, which could carry a sentence of between 10 and 20 years if convicted.

The investigation is continuing and additional charges and arrests remain possibilities.