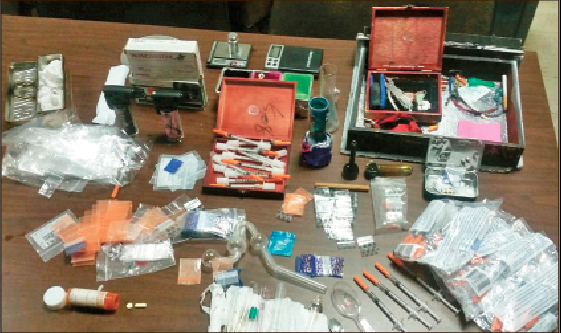 Deputies went to a residence on Lower Shirt Factory Road to serve a warrant last Wednesday night and ended up arresting five individuals and seizing several illegal drugs in the process.

According to the arrest reports officers went to the home around 8:00 p.m. Wednesday to serve a bench warrant against Nathan Cordell, 38, on charges of failure to appear.

Upon arrival officers spotted drugs and drug paraphernalia in plain view and contacted the owner of the residence, who gave them consent to search the house.

Brian A. Ball, 38, was charged with disorderly conduct after he reportedly refused to comply with the officers orders during the search.

Raymond A. King, 43, was charged with public intoxication and possession of a controlled substance.

Seth Cordell was charged with menacing after allegedly casing a disturbance  and ignoring orders by trying to make phone calls during the search.