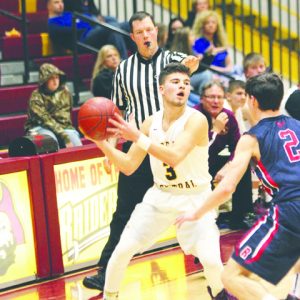 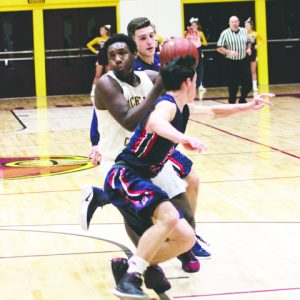 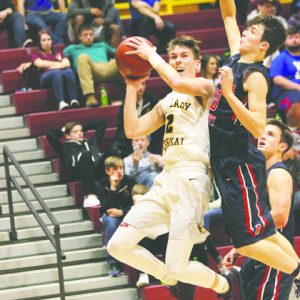 John Cash (left) looks for a teamate while breaking a Rockcastle trap. Devon Hamilton (middle) changes course on a drive. Hunter Jones (right) goes up for a basket.

Rockcastle built an early lead on five first quarter treys and McCreary turnovers, and looked to be poised for an easy night. But the Raiders corrected course and gave the Rockets all they could handle in the second half. Trailing by 14 points in the early moments of the third quarter, the Raiders mounted a comeback against Rockcastle County Tuesday night that allowed them to tie the game, but a flurry of scoring in the final minutes allowed the Rockets to escape with a 72-66 win.

McCreary trailed by 9 at the end of the first half, and Rockcastle would open the third quarter on an 8- run, giving them a 48-34 lead with 6:23 left in the period.

A Devon Hamilton basket and a three-pointer from Hunter Jones kick-started the Raider offense as they would close out the quarter on a 10-4, cutting the deficit down to 8.

A 7-0 run to open the final frame, with Brandon Troxell hitting a pair of free throws, a trey from Nick Longmire and baskets from Jones and Hamilton tied the game at 53-53 with 5:28 remaining.

McCreary didn’t give up, fighting back to cut the Rockets’ lead down to 7 with a minute left, and were forced to put Rockcastle on the line in the closing seconds for a chance to complete the comeback.

The Rockets would hit only 5 of 7 free throws down the stretch, which proved to be just enough to hold off the McCreary charge. As Jones hit a pair of treys in the final seconds to pull his team close.

The loss, which dropped the Raiders’ record to 13-9, came five days after a 74-49 win over Lynn Camp that saw three McCreary starters finish the contest in double figures in scoring. Hamilton would lead the Raiders with 17, Hunter Jones right on his heels with 16 and John Cash nailed five treys for 15 points in the win.

The Raiders host District rival Wayne County Friday night. The Cardinals knocked off McCreary 88-65 in their first meeting this season, and hold the second seed in the upcoming District Tournament.

Next week McCreary plays at Clinton County on Monday and at Oneida Baptist Institute on Tuesday.