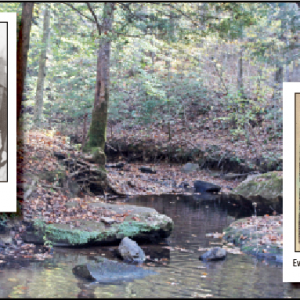 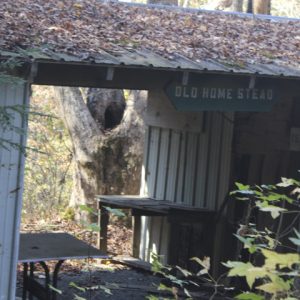 Photos by Eugenia Jones Since the Revolutionary War, the original homestead with its sprawling acreage along Cooper Creek has bound generations of the Young family together. 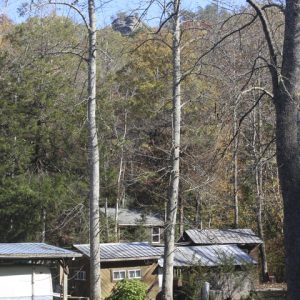 Since the end of the Revolutionary War, the ancestors and descendants of Willie Young have been bound together by fertile land down on Cooper Creek in McCreary County, Kentucky.  The land, received through a Revolutionary War land grant by a patriotic family ancestor for his service in that liberating conflict,  has served as either a home or gathering place for members of the family for well over two hundred years.

Sisters Lois Thompson and Loretta Champion, both granddaughters of Willie, recently travelled to McCreary County to present a print of William Walls’ painting of Cooper Delight Baptist Church to the McCreary County Museum.  The church, no longer visible, once stood high above Cooper Creek and welcomed those in the long ago community to its inner sanctuary.

While in McCreary County, Lois and Loretta returned to the old homestead on Cooper Creek to reminisce about days gone by.   As they travelled down the twisted gravel road to the original homestead, Loretta and Lois, as the daughters of Grandfather Willie’s son, Everett, were clearly happy to be back home.

With their Cooper Creek legacy reaching back to the birth of our country, it is Grandpa Willie who stands out as almost larger than life.  Willie was married to Ellis Griffis Young until her death and then married Angeline Spradlin Young.  Willie died in 1957 at sixty-five years old leaving Angeline with a two year old as the youngest of the couple’s ten children.  In total, Willie fathered twenty-one children.

It was Grandma Angeline who gave the U.S. Forest Service permission to use the family land for roads to access outlying government land in exchange for maintaining the community roads in the area.  Loretta and Lois, who once lived on what is now FS 859, still remember when the road was so rough that Jeeps were required for travel.

“At one point, it was so rough a Jeep couldn’t make it,” Lois recalled.  “We had to walk in and out.”

Willie’s handiwork as a stone mason is still visible throughout McCreary County.  Working with the Civilian Conservation Corps (CCC), he had a hand in crafting the stonework of Gatliff Bridge at Cumberland Falls, the old Whitley City Elementary School, and the Masonic Lodge at Greenwood.  The rock quarry seen on the right side of the road going down to Cooper Creek originated with Willie.

As Lois and Loretta got closer and closer to the old homestead, memories poured forth.  They pointed to the site where Cooper Delight Church once stood.  Looking further to the right, they recalled the Dumpy Sims’ place with its white two-story house and split rail fence.  Turning slightly to the left, the sisters gazed upward and pointed to the Hanging Rock, a huge boulder jutting predominantly outward against a backdrop of brilliant, blue sky.  The two smiled as they recalled the many teenagers who had trekked upward to plant an American flag proudly in the stony crevices of the rock.

Deterring to the Cooper Creek Cemetery, the two respectfully gazed on the final resting place of Grandpa Willie.  The weathered tombstone pays tribute to Willie’s military service as a Private in the 80 Div. of WWI.  Listening to the sisters describe long ago Decoration Days as holidays when family gathered at the cemetery to visit, decorate graves, and sing, one can almost hear the sounds of harmony echoing from the surrounding mountains.  To this day, the family keeps the tradition of gathering for Decoration (Memorial) Day by hosting a family reunion at the old homestead.  With 104 first cousins, it is easy to see how the reunion once drew 269 family members for dinner.

After leaving the cemetery behind, the two journeyed on to the old homestead. Today, the homestead by the creek is almost like a family compound dotted with campers, cabins, and pavilions erected by various family members who want livable spaces ready at all times for those who wish to come home to enjoy a few days of the special solitude and peace that define Cooper Creek.  Only a crumbling foundation and cold cellar remain from the days of Grandpa Willie.

Watching and listening as the sisters explore the homestead and share memories of the past, one understands why the sisters are so drawn to this place and the memories that surround it.  Their family is important because family is always there.  For the heirs of Willie Young, Cooper Creek land is the tie that binds them together across generations.