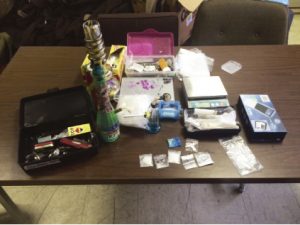 The investigation started after a traffic stop Wednesday evening. When interviewing subjects in the vehicle, officers were alerted to the possible location of a large quantity of illegal drugs.

Sheriff Waters arranged to have a confidential informant go to the location with the intent of purchasing drugs.

After the transaction, officers made entry into the residence, where approximately 6.9 grams of methamphetamine and drug paraphernalia were seized.

The investigation is continuing and Sheriff Waters stated he expected to present the case to the Grand Jury to seek an indictment against the individuals involved.