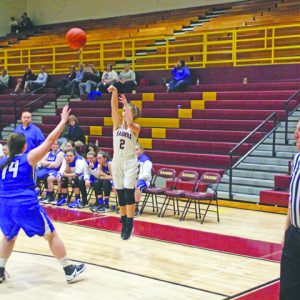 Photos by Greg Bird Ally Anderson hits a trey for three of her 23 points in the Lady Raiders’ win. 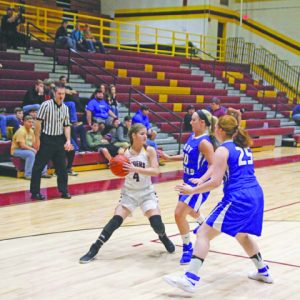 Liz Anderson looks to make a pass against Barbourville Monday. 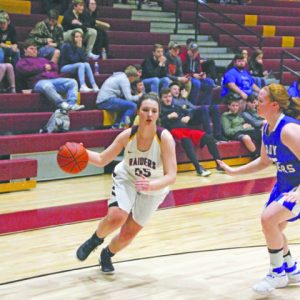 Ally Anderson and the Lady Raiders had a big second half Monday night to snap a 9-game losing streak with a 59-48 win over Barbourville.

Anderson scored 18 of her 23 points in the second half as McCreary erased an early 7-point deficit and stormed ahead to claim their fifth win of the season and take on new life as the schedule winds down.

Monday’s game saw a marked change in the Lady Raiders as a new, aggressive defense was in place, with McCreary applying pressure and trapping opponents on every trip down the court.

McCreary took and early lead against the Lady Tigers, but were unable to maintain it as turnovers led to several Barbourville points near the end of the first quarter, giving them a 14-7 lead at the end of the period.

The Lady Raiders’ recovery was keyed by back-to-back treys from Ceyla Kiser and a buzzer-beating basket from Brooke Sluder to cut the deficit to one, 26-25 at the half.

A flurry of Lady Raider baskets opened the second half as McCreary started the third quarter on an 11-2 run to take an 8-point lead.

Barbourville threatened to make a comeback of their own, once foul trouble forced two starters off the floor for several minutes, but aggressive McCreary defense was able to hold off the lady Tigers.

Holding on to a 6-point lead with 6 minutes left in the game, the Lady Raiders blew the game open with an 11-1 run, taking all chances of a Lady Tiger comeback away.

Anderson led both teams with 23, followed by Lauren Phillips with 9, Liz Anderson with 8, Brooke Sluder with 8, Ceyla Kiser with 5, Julia King with 4 and Macey Welchel with 2.

McCreary extended their win streak to 2 with a 54-11 blowout over Burgin on Tuesday, improving their record to 6-19.

The Lady Raiders play on the road for the next two games at Clinton County Saturday and Rockcastle County on Monday. Tuesday night McCreary will play their final home game of the season when they host Pulaski County.