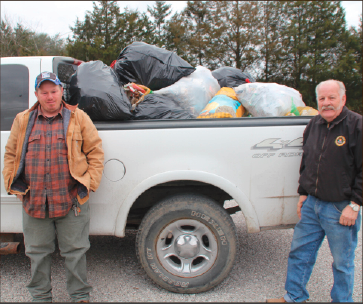 Photo by Greg Bird
Boyd Whitehead along with Claude and Bonnie Gregory collected more than 15 bags of trash along KY 92, but found no where to dispose of it.

One apparent casualty of a new deal between the McCreary County Fiscal Court and Scott Solid Waste seems to be community service.

Claude and Bonnie Gregory, along with their friend Boyd Whitehead, recently donated their time to do trash pick up along Highway 92 and Clark Hollow Road, as they had done for the past 8 years.

Last week the group collected more than 15 bags of trash from the roadway, but had nowhere to put it.

“We called the Judge’s office, and he told us we’d have to pay to drop the trash off at the Transfer Station,” Gregory said. “That’s crazy.”

Part of the new agreement between the County and SSW included a clause mandating the County take over daily operation of the Transfer Station.

Citizens are still permitted to bring garbage to Stearns, and pay $1 a bag for disposal, but Scott Solid Waste will only permit two weeks a year for free community drop offs during clean-up events.

Gregory, a McCreary County native, returned home in 2009 after retiring from a job in Indiana, said he and his wife spend hours picking up garbage people throw from their cars along West 92 and on Clark Hollow Road. Altogether they patrol nearly three miles of roadway each year in an effort to keep the unsightly litter from spoiling the scenic highway and their home road.

In the past, collection of the trash hasn’t been an issue.

“We’d call the Judge (Executive) and he’d tell us to bring it in,” Claude said. “And Linda Dobbs at L&M Grocery has been very kind to let us use their dumpster in the past.”

Judge Stephens said Tuesday the situation was nothing more than a miscommunication.

“In the past we have given them bags and taken in the garbage,” he said. “Right now there are no funds in the littler abatement program to pay for that kind of pick up. Scott Solid Waste charges us and we don’t have any money available for that right now.”

Stephens said the County sponsors civic groups who volunteer for roadside pickups, and will even pay those groups out of litter abatement grant funding, but to qualify the groups have to volunteer to take part in the annual Cumberland Falls Spring Cleanup event, or other County-sponsored cleanups. (The event is scheduled for March 25.)

“We certainly encourage citizens and civic groups to help us keep McCreary County clean and beautiful,” Judge Stephens said. “We just ask that they contact us first so we can make proper arrangements.’

Gregory thinks people should be more thoughtful when it comes to discarding their trash.

“How hard is it to wait until you get home, or wherever you are going to throw your wrappers away?”

He also believes more citizens should take time out of their days to clean up the roads near where they live, and wishes more would take an interest in keeping the County clean.

“There are 50 families on Clark Hollow Road and they just drive by and honk their horn and wave at us,” he said. “It’s a job to keep the road clean, I just want people to help.”

“Together we can make a difference.”

The Gregory’s story has a happy ending, at least.

After running into a roadblock from the Judge’s Office, they contacted the State Road Department who agreed to come and pick up the garbage.