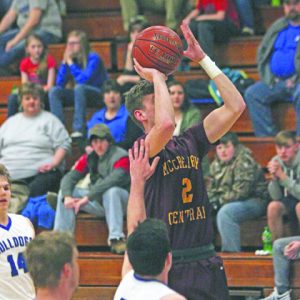 Photo by Chris Hollis Hunter Jones scored his 1,000th career point as a Raider with this shot at Clinton County Monday night. 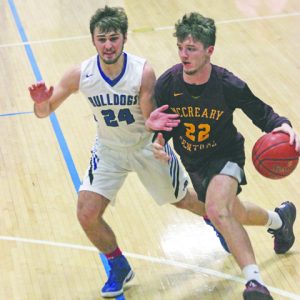 Photo by Chris Hollis Ryan Jones cuts to the lane in the Raiders’ loss to Clinton County. 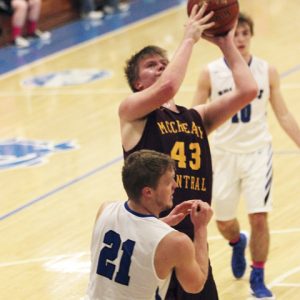 For eight minutes the McCreary Central Raiders put on a good show, grabbing the lead from District foe Wayne County and looking like they would give the Cards all they could handle Friday night.

But disaster struck in the second quarter as McCreary went cold – missing every shot from the floor and falling in to a 17-point defect, from which they would never recover.

Baskets by Devon Hamilton and Brandon Troxell gave the Raiders an early 4-0 lead in the first quarter. Wayne County would come back, eventually taking a 8-6 lead on a Clay Shelton 3-pointer, but back-to-back Hamilton baskets closed out the quarter with the Raiders leading 10-8.

Then the unthinkable happened.

Every shot put up by McCreary missed, some were close – rolling around the rim for a second before coming down in to the arms of a Cardinal defender.

The Raiders best chance at ending the scoring drought came with 5.5 seconds left in the half when Troxell went to the line for a pair of free throws, but both shots missed and the Cards took a 27-10 lead into the break.

McCreary shot a dismal 28 percent from the floor in the first half, hitting only five shots in total – all in the first quarter, and were outscored 19-0 in the second.

The scoreless streak, which lasted for nearly 11 minutes, ended with a Hamilton basket with 7:05 left in the third quarter – but the damage was already done.

Wayne County continued to cruise as the Raiders’ frustration mounted.

Near the end of the period McCreary’s John Cash was flagged for a pair of technical fouls, sending him to the locker room for the remainder of the contest. At that time the Cardinals held a 20-point lead, but used the momentum to increase their advantage by the end of the quarter to 27, 53-26.

The Raiders seemed to wake up a little in the final frame as Hunter Jones and Nick Longmire each connected for a pair of treys each, but the game was already out of reach and with about three minutes left both sides pulled their starters.

Wayne County would finish with a 74-49 win, cementing the second seed in the upcoming District Tournament with a 2-2 record. The Raiders fell to 13-10 with the loss and 0-4 in the District, for the third seed in the tourney.

The Raiders were led by Hunter Jones with 17, followed by Devon Hamilton with 12, Nick Longmire with 8, Brandon Troxell with 4, John Cash with 3, Ryan Jones with 2 and T.J. Privett with 2.

McCreary followed the loss with two more: falling to Clinton County, 59-43, on Monday and Oneida Baptist Institute, 75-71, on Tuesday.

The Raiders have just four regular season games remaining: Friday against East Jessamine, Monday against Garrard County, Next Thursday at Barbourville and next Friday against Whitley County.