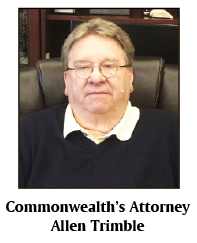 A 2012 Whitley County Grand Jury indictment against an Oak Ridge man charged with second degree manslaughter has been reversed after a recent ruling by the Kentucky Court of Appeals.

After an appeal by the defendant, Keith Mason, the Court found Commonwealth’s Attorney Allen Trimble committed “prosecutorial misconduct” by presenting “erroneous” legal advice during a presentation to the Grand Jury, which resulted in an indictment being released.

According to the ruling the case began in 2012 when Mason shot and killed his former father-in-law, Robert Vanover, during an altercation on a Whitley County property owned by Mason’s sister.

Mason contended the act was in self-defense, and a Grand Jury returned a “no true bill” against him when the case was first presented.

However, the case was brought before the Grand Jury a second time, whereupon Trimble’s statements to the panel were called in to question.

According to the ruling the case began when Mason arrived at the property with his 19-year old daughter to find Vanover already at the location, visiting his son who lived there. Vanover had divorced Mason’s mother 20 years prior, and the two had not seen each other since. Reportedly Vanover had made threats against Mason at that time.

Mason confronted Vanover, advising him he was not supposed to be on the property, when the two got in to an altercation.

Vanover allegedly hit Mason, possibly with a flashlight found on the scene, and Mason shot his assailant several times, hitting him in the chin, upper chest and side.

Mason contended he acted in self-defense.

When first presented to the Grand Jury to seek a murder charge, the Jury did not indict, but the second attempt secured a second-degree manslaughter charge.

During the second Grand Jury presentation Trimble interjected legal advice to the Jury during testimony from the detective in the case.

As the detective was discussing the possibility of Mason using force in an act of self-defense, Trimble stated; “you only have the right to use deadly force to confront deadly force or if it appears they are going to kill you.”

In fact, a 2006 law, referred to as the Castle Doctrine, allows for lethal force against someone trying to enter your residence or forcibly remove you from your home or vehicle.

Mason’s attorney contended in legal filings following the indictment that the information provided by Trimble was inaccurate and claimed prosecutorial misconduct had occurred and asked for the indictment to be dismissed.

Circuit Court Judge Paul Winchester denied the motion, as well as a second motion to dismis based on a self-protection claim, stating it would be up to a jury to decide the facts of the case.

Mason subsequently accepted a plea deal to submit a guilty plea in 2014, but retained the right to appeal the case.

Last month the Court of Appeals reviewed courts transcripts of the proceedings and ruled in Mason’s favor, stating the “misadvice” given by Trimble to the Grand Jury created prejudice against Mason.

“The proper administration of justice requires prosecutors to conduct a reasonable amount of legal research to give accurate answers to legal questions,” the opinion stated. “This requirement is not a herculean task, as many legal inquiries are readily ascertainable from the statutory and case law. Indeed, in the present case, the law was clear and readily understandable.”

The Court ruled in favor of Mason’s request to reverse the original Court’s denial of the motion to dismiss the indictment.

Mason’s attorney has asked the case be dismissed without prejudice, which means the case can not be brought before a Grand Jury again, but the Court of Appeals did not act upon that motion.

In a statement given to the Corbin Times Tribune, Trimble admits to the error, but contends it was a singular event.

“One of the biggest mistakes that a lawyer makes is to start quoting the law when he doesn’t have it in front of him. A lot of times a grand jury will ask you a question that it would take 10 pages of legal literacy to explain to them.”

Trimble also said he did not expect to object to the defendant’s motion to have the case dismissed with prejudice.