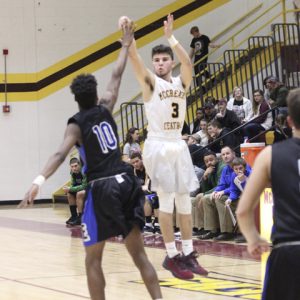 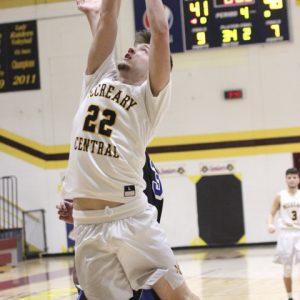 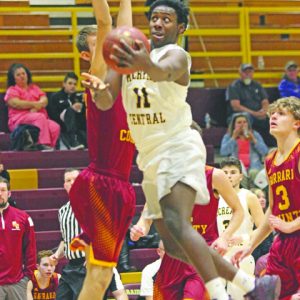 Photos by Chris Hollis Devon Hamilton and Hunter Jones had big nights against the Lions, pushing the Raiders to a win. 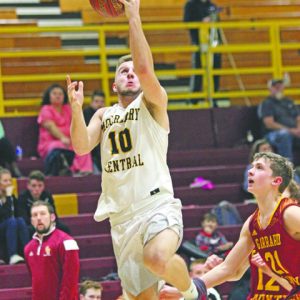 Photo by Chris Hollis Brandon Troxell goes up for a layup against Garrard County Monday night. 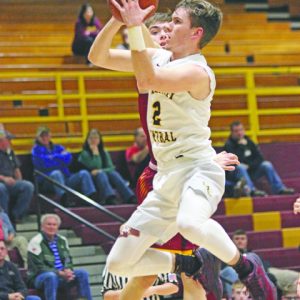 Photos by Chris Hollis Devon Hamilton and Hunter Jones had big nights against the Lions, pushing the Raiders to a win.

The Raiders, perhaps still on tilt from their loss against East Jessamine Friday, where they saw a one-time 10-point lead disappear, came out against Garrard County Monday night slow and sluggish. But they managed to recover and pull away to a 67-45 win.

Playing a soft defense and forcing poor shots on the offensive end, McCreary just couldn’t seem to grab control of the contest despite leading most of the way.

It didn’t help that the Raiders were hindered by what many saw as one-sided foul calls. McCreary was whistled for 12 personal fouls in the first half, sending Garrard County to the line five times, while the Lions were only whistled for five, two coming in the final minute. Garrard County only made five baskets in the half- just one in the second quarter- but still were able to stay on the Raiders’ heels, heading in to halftime down only 2 points, 23-21.

After the shaky start the Raiders started to pull away from the Lions in the second half, thanks in part to Devon Hamilton who scored 17 of his 21 points in the final 16 minutes.

McCreary dominated on the boards throughout the game, particularly on the offensive end, getting 16-points off second-chance shots.

Building up a 7-point advantage by the end of the third, the Raiders put the game away for good in the opening minutes of the fourth quarter with an 8-0 run that the Lions could not recover from.

Hamilton led the Raiders with 21 points, followed by Hunter Jones with 14, Ryan Jones with 11, Trevor Strunk with 6, Nick Longmire with 5, Brandon Troxell with 2 and Kade Cotton with 2.

Friday night the Raiders suffered a disappointing loss to East Jessamine, squandering a 10-point lead at the start of the fourth quarter to fall 67-61 to the Jaguars.

In a tense, and hard-fought game, the Raiders managed to hold a slight advantage throughout most of the contest, but poor ball handling by McCreary kept the Jaguars close, and eventually allowed them to come from behind in the final two minutes.

With 5:19 left in the final quarter the Raiders had a 54-44 lead, but Jessamine would go on a 14-5 run over the next four minutes to cut the advantage to just 1 point, and would take the lead after a McCreary turnover led to a four-point play off a trey and a free throw with 1:25 left.

A Hunter Jones basket with 55 seconds left cut the Raiders’ deficit down to 1-point. The killing blow came with 28 seconds left when a Raider player was called for a technical foul protesting a previous foul call, giving Jessamine four free throws and the ball back.

Ryan Jones led McCreary in scoring with 17 points, followed by Hunter Jones with 15, Devon Hamilton with 15, Brandon Troxell with 5, John Cash with 3, Nick Longmire with 2, Tyler Strunk with 2 and Trevor Strunk with 2.

The Raiders close out their regular season with two games this week. On Thursday they will travel to Barbourville, then return home for their final home game against Whitley County on Friday night.

On Monday the Raiders take on the Wayne County Cardinals in the opening round of the 48th District Tournament, hosted by Southwestern. Tip off is scheduled for 7:30 p.m.

The Cardinals defeated the Raiders in both their meetings this season, an 88-65 victory on January 9, and a 74-49 win on  February 3.