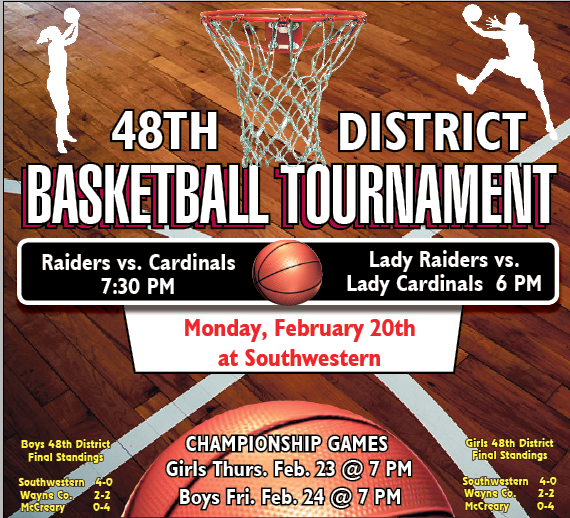 Monday night kicks off the 48th District Basketball Tournament for both the Raiders and Lady Raiders.

The Lady Raiders start things off with a 6:00 p.m. match up against the Wayne County Lady Cardinals. Both games will be held at Southwestern High School.

In their two regular season meetings the Lady Cards came away with wins both times: 59-34 on December 9 and 72-36 on February 2.

Wayne County is led by Ashtyn Bell, who is averaging 13.2 points per game. Two other Lady Cardinals, Macey Blevins (12) and Megan Burchett (10.6) are averaging double figures for the season.

The Lady Raiders, by contrast, have only one player scoring in double figures – Allison Anderson, who is averaging 16.3 points per game.

The Lady Raiders are still a very young team compared to the Cardinals, but Coach Todd Waters has stepped up the intensity recently, invoking a more aggressive defensive style and hopes that will allow his squad to slow down the Wayne County offense, which is averaging nearly 57 points per game.

McCreary will need to step up their offensive game as well, averaging only 44 points per game, but Brooke Sluder has emerged as more of an impact player as of late, as well as the rest of the Lady Raider squad.

The Boy’s team follows with a 7:30 p.m. showdown against the Wayne County Cardinals.

Suffering defeats in their two regular season matches against the Cardinals this season, Coach Jimmy Voight hopes his Raiders can cool down Wayne County Monday night.

The Cards are currently on a six game winning streak and are averaging 72.6 points per game. The Cardinal defense is susceptible however, as they are allowing opponents to score 70 points per game.

Both the champion and second place finishers will advance to the 12th Region Tournament the following week.