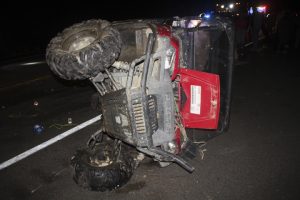 According to Deputy Odell Smith, Braxton King was travelling southbound around 9:48 p.m. when two 4-wheelers crossed the road in front of him. Moments later a Polaris Ranger side-by-side was also traveling southbound on or near the shoulder when it suddenly turned in to the path of King’s vehicle.