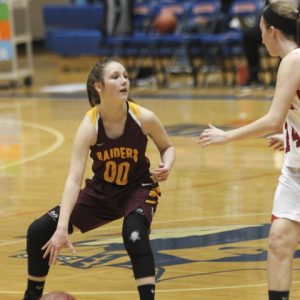 Photo by Chris Hollis Julia King looks for an outlet to pass to. 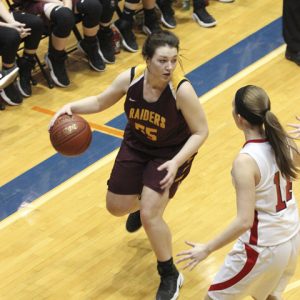 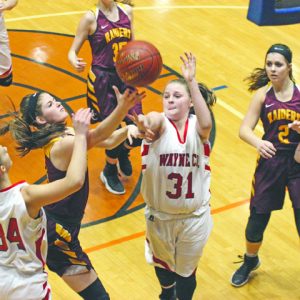 Photo by Chris Hollis Liz Anderson cuts through a flock of Lady Cardinal defenders on her way to the basket in the District Tournament game Monday night.

It was not the way the Lady Raiders hoped to be ending their season, but Coach Todd Waters believes it will help build a strong foundation for the future.

Suffering a 69-51 loss to the Wayne County Lady Cardinals in Monday’s 48th District Tournament, the Lady Raiders closed the book on a 2016-17 season that never lived up to expectations.

With three starters on the bench for the first quarter for disciplinary reasons, the Lady Raiders found themselves in a hole early.

Wayne County, taking advantage of the situation, stormed ahead to an 11-0 lead before McCreary got on the board with a Julia King basket with 3:55 left in the first quarter. The Lady Raiders would add only one more point in the period, as seven turnovers stalled most of the McCreary offense in the quarter.

McCreary had trouble getting baskets in the first half, hitting only three over the first 16-minutes, but were helped a little at the free throw line, hitting 6 of 10 shots.

The Lady Cardinals continued to score, however, pulling away for a 32-point lead at the break, 45-13.

McCreary opened the third quarter strong, with baskets from Brooke Sluder and Macey Welchel, but they couldn’t overcome the Wayne County offense, which seemed to match them basket for basket.

When the dust settled, the Lady Raiders’ season came to a close, and Coach Waters complimented they way his team played through adversity.

“I’m proud of the effort out there tonight,” Waters said after the game. “They played as hard as they could the whole way through.”

“We were outmanned out there on the court, but we didn’t quit and we will build on it the next year and beyond.”

“I think we are in pretty good shape after this,” Waters continued. “We have nearly everyone back next year, and they all will have more experience under their belts.”

Ally Anderson led the team with 16 points, followed by Liz Anderson with 12, Brooke Sluder with 6, Macey Welchel with 6, Julia King with 4, Ceyla Kiser with 2 and Emily Anderson with 2.

McCreary ends the season with a 7-24 record.

Wayne County (17-13) will advance to take on Southwestern (17-10) tonight in the District Championship game.