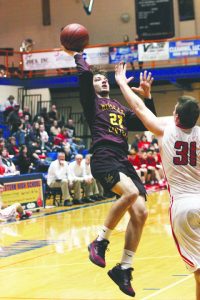 Photo by Chris Hollis Ryan Jones had a big night against Wayne County, leading the Raiders with 18 points, but McCreary still had their season ended with a loss. 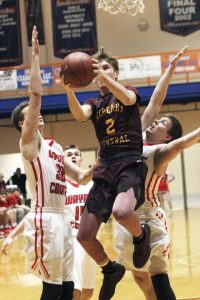 Photo by Chris Hollis Wayne County’s plan was to limit Hunter Jones’ opportunities to score, but he still got his licks in.

Coming off Friday night’s regular season ending 20-point win over Whitley County, the Raiders picked up where they left off Monday when they took on the Wayne County Cardinals in the opening round of the 48th District Tournament.

Leaving it all on the court, the Raiders gave the Cardinals all they could handle, and them some, but in the end, it just wasn’t enough as Wayne County held off a determined attack for a 69-56 win, putting an end to the Raiders’ season.

Coach Jimmy Voight pushed his team to their limits Monday, and the team responded with some of their best play all season, but a game-changing moment in the third quarter allowed Wayne County to pull away for good.

McCreary fell behind 5-0 in the opening minutes of the game, but fought back to end the first quarter with an 11-11 tie.

Back-to-back baskets from Devon Hamilton mid-way through the second period gave the Raiders their first lead, 19-18, but the Cardinals answered with a basket on their next trip down the floor. Brandon Troxell put back a shot on an offensive rebound with 3:16 left in the half for another McCreary lead, but it would be their final lead of the game.

The Cardinals closed out the half on a 7-0 run as the McCreary offense started to get out of their rhythm- rushing shots and taking unneeded risks with the basketball, creating turnovers and giving Wayne County a 27-21 lead at the break.

The Raiders managed to keep pace with their foes at the start of the third quarter, but the momentum changed mid-way through the quarter with two questionable charge calls against Ryan Jones and Hamilton.

The Raiders were down 5-points when the second foul call happened, and it seemed to disrupt the Raiders’ flow on the floor.

McCreary continued to fight back, cutting the lead down to 9 with 2:00 minutes left, but soon after both Hamilton and R. Jones drew their fifth and final fouls, effectively ending the chances of making a comeback

After the game Coach Voight said his team gave everything they had, and should use the game as a learning experience to get them thinking of next year.

“The effort was good tonight,” he said. “We took some ill advised shots and got out of sync there for a bit in the third quarter. We had seen it all season where we try to force things, and it reared its’ ugly head again tonight.”

Voight is already looking ahead to next season as four of five starters return, and the bench gained valuable experience over the 30-game schedule.

“(Devon) Hamilton will be hard to replace, but we have a bunch of kids who did a lot of growing up this season and will be back stronger and better next year, and hungry for a chance to take us to the next level.”

McCreary ended the season with a 15-15 record.

Ryan Jones lead the Raiders with 18 points, followed by John Cash with 12, Hunter Jones with 11, Devon Hamilton with 6, Brandon Troxell with 5 and Nick Longmire with 2.