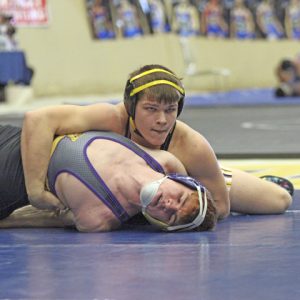 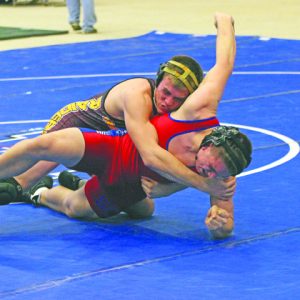 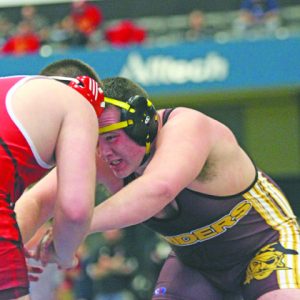 Three McCreary Central wrestlers got the opportunity to showcase their talents on the big stage last weekend in the 2017 KHSAA State Wrestling Championships, held in Lexington.

In the opening round Prosser pinned Male’s Jack Lucas in 5:05, but fell by a 3-2 decision to North Hardin’s Raymond Williams in the next.

In the consolation bracket Prosser knocked off Daniel Langford of Trinity, 8-3, and Valley’s Kane Garner with a pin at 4:45.

His title dreams came to a close in the next round, a 7-0 loss to Union County’s Mathias Ervin. Ervin would eventually place sixth overall.

Ryan Strunk, wrestling at 160 pounds, finished 2-2 in the tournament.

After an opening round 6-4 decision over Isaac Nichols of North Hardin, Strunk fell via pin to Jared Brunch of Fern Creek. Strunk kept his tourney alive with a pin fall victory over Scott’s Jared Kelsay, but dropped his next match with an 8-5 decision against Valley’s Tyjeric Williams.

Anderson dropped his first round match 11-2 to Sheldon Clark’s Dakota Putnam, but kept alive with a 3-2 decision over Austin Miller of Bullitt East in the consolation bracket. He was pinned in the next round to R.J. Boies of Anderson County.

Overall the Raiders, as a team placed 50th out of 93 teams in the tournament.