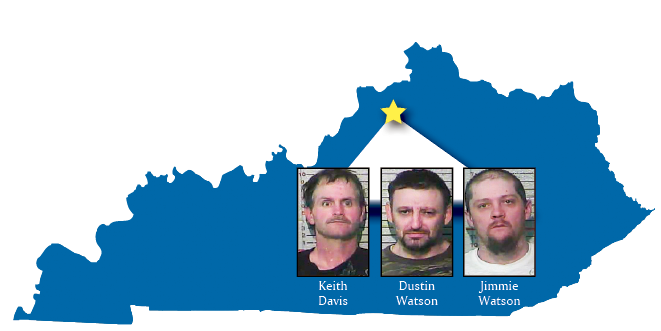 Three McCreary County men are behind bars in a Frankfort jail after a traffic stop led to the discovery of meth and cash in their vehicle.

The Kentucky State Police reports Jimmie Watson, 36, of Revelo, Dustin Watson, 32, of Whitley City and Keith Davis, 46, of Whitley City, were arrested and charged with trafficking in a controlled substance and possession of drug paraphernalia following a 3:00 a.m. traffic stop on I-65 in Franklin County.

A search of the vehicle revealed 5.3 ounces of methamphetamine and a large quantity of cash.

All three suspects are being lodged in the Franklin County Regional Jail. Both Watsons are being held on a $25,000 bond, while Davis’ bond is set at $10,000. Davis was also charged with speeding, careless driving and improper signal.