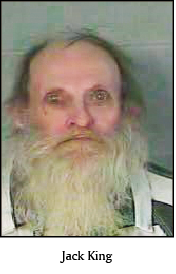 A man indicted by the McCreary County Grand Jury this month on drug charges faces additional charges after officers found more than 8 grams of meth when serving the indictment warrant.

Jack King, 58, of Strunk, was indicted on charges of Trafficking in a Controlled Substance First Degree, Possession of Drug Paraphernalia and Trafficking in a Legend Drug for allegedly having over 2 grams of methamphetamine and a quantity of Neurontin for the purpose of sale and items commonly used for the ingestion and/or distribution of illegal controlled substances on October 20 of last year.

Sheriff Randy Waters reported Deputies Milford Creekmore and Cody Stephens went to a Rutherford Road residence around 11:45 Tuesday night to serve the indictment warrant and found King sitting in a vehicle with a bottle of liquor between his legs and a strong odor of alcohol on his breath. Under the seat officers found a pill bottle with King’s name on it containing three baggies of meth, weighing 8.7 grams. Also found in the vehicle was a meth pipe and torch. 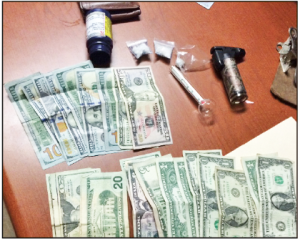 Photo by courtesy MCSO
Officers siezed more than 8 grams of meth and over $1,000 when making an arrest on an indictment warrant Tuesday night. Nearly a dozen people were arrested over a two-day span, making a busy start to the week for law enforcement.

According to the arrest citation King had $1,027 dollars on his person when he was arrested.

In addition to the indictment, King faces additional charges stemming from his arrest.

Also arrested at the scene was Tommy Vanover, 38, of Strunk, who found to have .13 grams of meth on his person.

Both men were lodged in the Leslie County Detention Center.