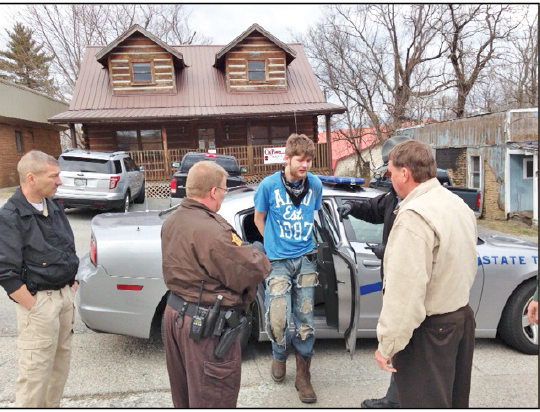 Photo by Greg Bird
Phillip Cartwright was arrested Monday after causing a disturbance at Pine Knot Primary School and fighting with officers.

A Whitley City man was arrested Monday afternoon after reportedly causing a disturbance at Pine Knot Primary School and attempting to flee from officers.

According to the arrest citation Phillip H. Cartwright went to the school, where his mother works, around 2:00 p.m. Monday afternoon. The 18-year-old caused a disturbance and was asked to leave.

School Resource Officer Phillip Hayes attempted to get the subject to leave, and noticed he appeared to be under the influence and was combative. When Sheriff Randy Waters, Deputy Tom Smith, KSP Trooper Matt Ridener and Fish and Wildlife Officer Chris King arrived on scene to provide assistance, Cartwright attempted to flee and was detained by the officers. The subject remained combative, and when placed in the cruiser he began kicking at the officers, and was tazed before the altercation escalated.

He was lodged in the Leslie County Detention Center. 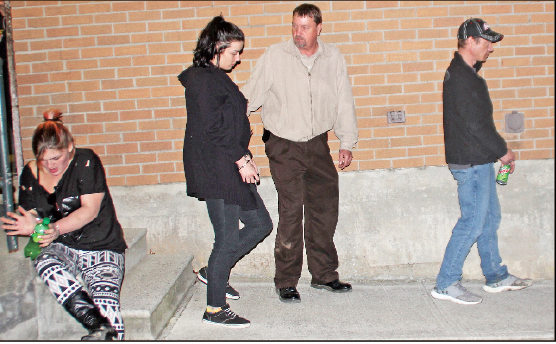 Photo by Greg Bird
Julian Good, Victoria Moulton and Tony Spradlin are led to a transport van Monday after being found with drug paraphernalia in a vehicle they did not have permission to use.

Later that same evening Sheriff randy Waters reported the arrest of three additional individuals in relation to the case.

Apparently a vehicle owned by Cartwright’s mother had been taken from her without her permission and officers located the car on Ingram Road around 9:30 p.m. that evening.

Julian M. Good, 28, of Whitley City, Tony E. Spradlin, 38, of Stearns, and Victoria L. Moulton, 22, of Gallatin, Tennessee, were arrested and charged with unauthorized use of a motor vehicle and possession of drug paraphernalia after being found in the vehicle without the owner’s permission. A drug pipe and straws were found in the car when searched.

All three were also lodged in the Leslie County Detention Center.