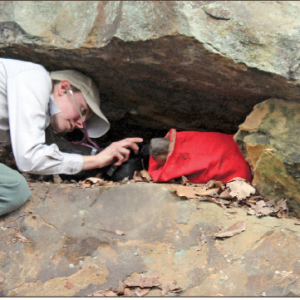 Photos by Eugenia Jones: Kentucky Fish and Wildlife Resources biologists and other researchers recently spent time in McCreary County conducting bear den research on the local bear population. Research on the McCreary County bear population has been ongoing since 2009. By safely tranquilizing females in their dens, researchers can examine overall health of the females, pull blood for disease investigation, count and tag cubs, and replace tracking collars on the females. All of the information gleaned from den work provides data for the overall population model and influences how KDFWR set season dates and quotas. 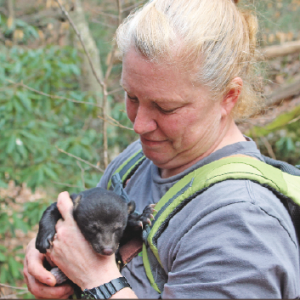 Photos by Eugenia Jones: A worker from the Louisville Zoo gets up close and personal with a McCreary County bear cub during a recent research assignment. 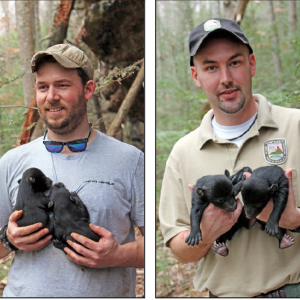 According to KDFWR Bear/Furbearer/Wild Pig Program Coordinator John Hast, the proposal to close bear season in McCreary County is due to the following reasons:  low population numbers according to a research project with the University of Kentucky, fear the continuation of hunting in McCreary County will yield a 0-percent growth rate, a drastic decline in the number of nuisance issues since 2014/2015, and finally, an overall goal to increase hunter opportunity in the vicinity of McCreary County while using other tactics to manage nuisance issues.

In supporting the claims of a low bear population and a drastic decline in nuisance bear issues in McCreary County since 2014/2015, Hast shared data indicating only eight nuisance complaints logged in the DKFWR’s online database in 2016.  In 2014 and 2015, 74 and 89 complaints were logged, respectively.  The Big South Fork National River and Recreation Area staff indicated zero nuisance issues in the park in 2016.  Additionally, KDFWR handled zero nuisance complaints on the Daniel Boone National Forest, Stearns District in 2016.

However, local data and anecdotal reports seem to dispute the KDFWR data.  McCreary County’s local 911 dispatch logged 290 bear complaints during 2016.  Bear complaints received at 911 peaked during the summer months with an average of fifty complaints per month during May, June, July, and August. These numbers do not account for repeat sightings. In addition to calling local 911, individuals reporting bear situations are encouraged to call 1-800-25-ALERT at all hours of the day or during business hours 1-800-858-1549. This will ensure an accurate count of local bear situations at the state level. Bear sightings have been reported throughout McCreary County including on Main Street in Whitley City and at garbage dumpsters of local businesses.

During 1996-1997, the National Park Service transported bears from the Great Smoky Mountains National Park to the Big South Fork National River and Recreational Area (BSFNRRA).  The fourteen radio collared females, along with their thirteen cubs, were released in the BSFNRRA adjacent to the Kentucky-Tennessee line in an attempt to stock bears in the area.  In 2009, the Kentucky bear population had become sufficient enough for Kentucky to allow bear hunting in a limited, three county hunting zone for the first time in one hundred years.  Since then, the hunting zone expanded to include sixteen southeastern Kentucky counties.  McCreary County was included in the hunting zone in 2014.  Despite numerous local sightings and nuisance bear complaints, harvest in McCreary County has typically been low with only one male bear harvested by hunters in 2016.

In an effort to protect the bear population, Kentucky’s bear hunts are heavily regulated with a limit on the total number of bears that can be harvested within the hunting zone per season. The harvest of female bears is limited, and the harvest of cubs is totally prohibited.  In addition, the BSFNRRA within McCreary County (and Scott County, TN) is one of four reserve areas in the zone where bear hunting is banned.