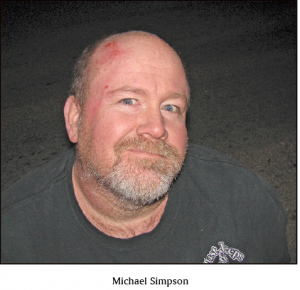 A Tennessee man led officers from two states on a pursuit that ended in southern McCreary County early Tuesday morning.

Sheriff Randy Waters states the Oneida Police Department notified McCreary County 911 that officers were in pursuit of a suspect in a burglary case, who was travelling northbound on U.S. 27 in a silver GMC Yukon.

The suspect, Michael Simpson, 44, crossed in to McCreary County around 12:30 a.m.

While Deputy Perry had laid spike strips across the highway in the direction the suspect was travelling, Deputy Creekmore managed to pull in front of the fleeing vehicle in an attempt to slow him down, being struck in the rear by Simpson, causing slight damage to the cruiser. 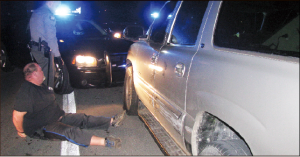 As they approached the spike strips, the Deputy veered off to avoid tire damage, while Simpson cut over to the emergency lane, headed toward Deputy Perry.

Sergeant Smith positioned his cruiser in the path of Simpson’s vehicle, forcing him to stop after a slight collision.

Deputy Creekmore and other officers boxed in the subject and took him into custody without incident.

Michael Simpson, 44, was arrested and charged with 8 counts of wanton endangerment of a police officer, no operator’s license and no insurance. He also faces charges in Tennessee.