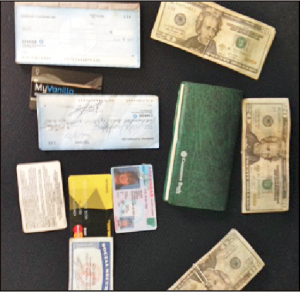 Photo by Greg Bird
Counterfeit bills, checks and ID’s were recovered from a campsite that was tied in to an Arkansas case.

An Arkansas woman is facing forgery charges in a case that has a small connection to McCreary County.

The Baxter County Sheriff reported Christie Lynn Lundholm, 49, is facing 123 counts of forgery in Arkansas after the discovery of a suitcase containing several counterfeit bills.

Lundholm was an inmate at the Baxter County Jail under separate felony theft charges, when relatives went to a storage unit used by Lundholm to clean it out when they found the funny money and notified authorities. The money was located in a suitcase, filled with 123 counterfeit bills.

The investigation revealed Lundholm had been in McCreary County previously and counterfeit money had been found there as well.

Sheriff Randy Waters reported his office was asked to clean out a campsite in the Great Meadows area last month where some people from Arkansas were staying. Some of the individuals were arrested in Scott County Tennessee on shoplifting charges.

In gathering items from the site, several counterfeit bills and checks and identification cards were recovered and kept as evidence.

Sheriff Waters also stated the United States Secret Service is conducting their own investigation and asked that the evidence be preserved.