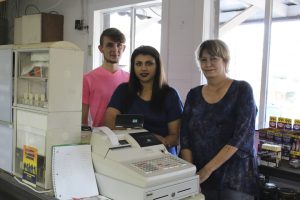 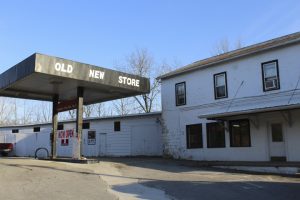 Until its doors closed for business just a few years ago, New’s Grocery at the top of Yamacraw Hill on HWY 92W was a handy shopping spot for many McCreary Countians as well as campers, picnickers, and fishermen on their way to Rock Creek.    On Saturday, new owner,  Pam Tucker,  reopened the grocery under the appropriate name of the “Old New Store.”  Tucker, daughter of the late Bob and Marcella Ross, is no stranger to the small grocery business having spent her teenage years living with her family in their home on the second level of her parent’s grocery store at the foot of Yamacraw Hill.  The “Old New Store” opens early and closes late seven days per week.  The grocery section features convenience items.  A deli, with seating, will be opening soon featuring sandwiches, burgers, breakfast, and country cooking.  Hoping to keep the family tradition of operating a small grocery business alive for future generations, Tucker said she will leave the day to day operations of the store to her grandson, Travis Shoopman, and her niece, Sierra Perry.