With support of volunteers and donations, McCreary Phoenix Race Team makes a difference in lives of local youth 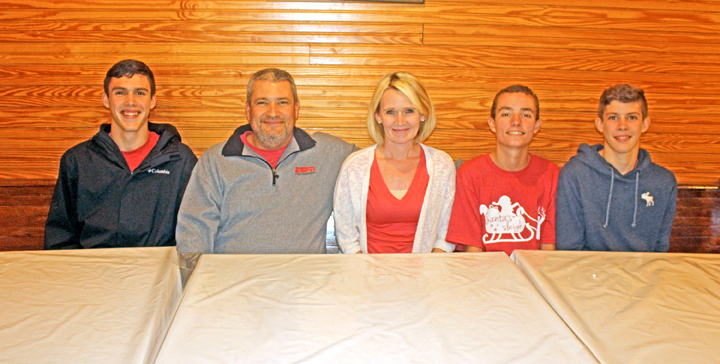 Five years ago, McCreary County High School teacher and founding coach of the McCreary Phoenix Race Team Chad Starrett was sitting at home complaining about the problems faced by the students he serves.  His wife, Tami, also a teacher, quickly redirected her husband’s gripe session into a “get it done” session by telling Chad to quit grumbling and do something to fix the problems.

“She made me start thinking about the things my students need in order to be successful,” Starrett recalled.  “I realized many of them need help learning how to set and attain goals, and they need a lot of confidence building.  They need to realize they can overcome negative stereotypes and realize the importance of giving back to the community instead of just taking.  I wanted their focus to be on and value of servant leadership.”

Starrett, who was jogging at the time to help himself lose weight, decided a race team might be part of the solution.  When a friend, Mark Hamm of Phoenix Wellness in Somerset, agreed to help with corporate sponsorship, Starrett recruited four students for the Phoenix Racing Team.  With those four students, Starrett’s personal adventure in helping McCreary County youth began.

“It started out being all about mentoring,” Starrett remarked.  “My focus was on kids who weren’t athletes and who were falling through the cracks.  The team has evolved during the past five years though.  Now, along with mentoring, it has turned into an athletic program.  We’ve had three kids in the last two years who have gotten scholarships to run in college.”

The program is definitely growing.

Starrett has welcomed Trevor Tucker as an additional coach to help with the growing number of team members.

“Now, we have thirteen members, and we’ve got a mile long waiting list of kids who want to join,” Starrett remarked.  “We’d like to be able to take on more kids but funding is an issue.  We are not school related and depend on fund-raising, volunteers, and the community for donations.  Phoenix Wellness sponsors us by helping with race fees and uniforms, but we try to provide a lot of extra opportunities to support the kids.”

After all, for Starrett, it’s not just about racing.  It’s about team members becoming the best they can be.

It’s not uncommon for the team to bond at cook-outs, pool parties, and through community service projects.  Starrett is a firm believer positive experiences for his team members will help them grow into positive adults.

“Racing is great, but serving the community makes it worthwhile,” Starrett remarked.  “The kids give of their time and themselves.  They really are incredible kids.”

Community service activities for the team thus far include helping with the Hills and Hollers clothing ministry, installing window air conditioner units for those in need, teaming up for Relay for Life, and visiting and cooking a meal for those at Hope Lodge.  The team currently plans to provide snacks and appreciation cakes to the State Police, McCreary County Sheriff’s Office, and Pulaski County Police.

“The kids want to shake hands with the officers and let them know they are appreciated,” Starrett explained.

Starrett has faith the program will expand to include even more members.

“Phoenix helps pay for races, and we (the Starretts and Tucker) often spend our own money for the extras,” Starrett explained.  “We manage to pay for everything, and God has always provided.”

The impact of McCreary Phoenix Racing Team is apparent as one talks to current and past members.

One former Phoenix member, now attending college, hopes someday to return to McCreary County to teach and coach a Phoenix team.  He wants to give back to the community.

Current team members speak glowingly of the impact of the team on their lives.

“In the past, I was disrespectful, but now I’m not,” seventeen year old Harley said about his experience with the team.  “I couldn’t be more thankful.”

“It is great not being judged and having friends of all different types,” fourteen year old Aiden added.  “We’re family!”

“He’s got that right!  That is what the team has become,” Starrett interjected.  “We’re a family!”

This year saw the addition of the first female members on the team.  Now with three female members, Starrett is pleased and credits God for the decision.

“It was time to add girls to the team,” Starrett explained.  “I just sat back and let God tell me it was time.”

The McCreary Phoenix Racing Team covers a lot of territory by participating in a variety of races including the Louisville Triple Crown Race and the Cincinnati Flying Pig Half Marathon.  The three captains of the team even qualified and ran in the Foot Locker Nationals held in Charlotte, North Carolina.  Starrett is pleased McCreary Phoenix members were the first McCreary County youth to run the Foot Locker.

While Starrett is clearly proud of the unexpected athletic success of the team, he is obviously more pleased about the impact the program is having on the development of character and citizenship in its young members.

“You get the best feeling when the kids circle up before a race, throw their arms around each other, and pray,” Starrett shared.  “It’s a feeling that’s hard to beat!”