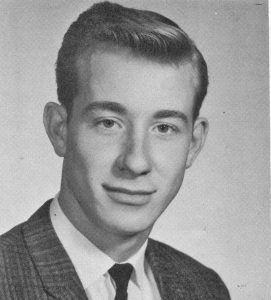 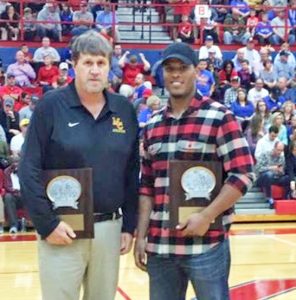 Three McCreary County stand out athletes were inducted to the 12th Region Basketball Coaches Association Hall of Fame last week during the 12th Region Championship game.
Robert Jones was among the Coaches inductees, and Aaron Watts and Robert Smith were named to the Hall as players.
Jones, who served as head Coach at McCreary Central for 17 seasons racked up 224 wins and led his squad to 2 District Championships (09, 10), and 7 12th Region Tournament appearances; including a runner up finish in 2009.
Jones was inducted to the Hall in 2010 as a player.
Watts, who played for the Raiders from 2005 to 2010, finished his career as the Raiders’ all-time leading scorer with over 3,000 points. (Tim Stephens scored 3,211 for McCreary County High School.)
He was a part of 2 District Championship teams and was named the 12th Region Player of the Year in 2010, a member of the Kentucky/Indiana All Star Team and a finalist for the McDonalds All American Team. He was also inducted into the Kentucky Farm Bureau Athletic Hall of Fame in 2010.
Smith graduated from Pine Knot High School in 1962 and holds the rebounding title for the school with 1,410. He is second in all time scoring with 1,645, only 23 behind leader Charles Wood. He started nearly every game in his four-year career and also logged the most minutes played for the school.
He averaged 17.6 points and 16 rebounds per game in his senior season, leading Pine Knot to a 27-7 record. As a junior he was named the best player in the 47th District Tournament and led his team to their first trip to the 12th Region Tournament.
(Estil Daugherty contributed to this report.)