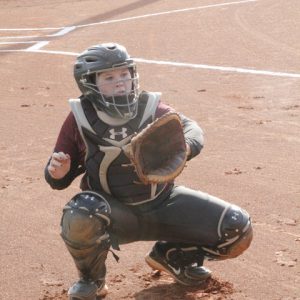 Photos by Greg Bird Grace Jones got the Lady Raiders only hit of the night. 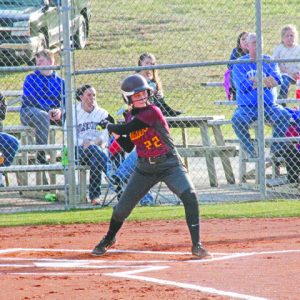 Cammi Gilreath takes a cut and fields a ball at short. 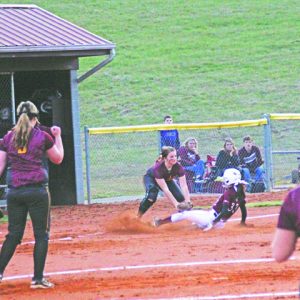 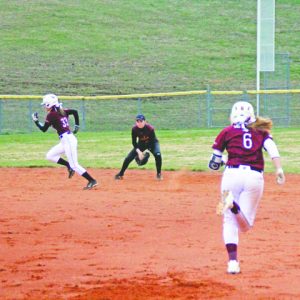 McCreary struggled at the plate, striking out 13 times in five innings, and only four batters reached base on three walks and a single.

Coach Todd Waters said after the game that the offensive struggles stemmed from the fact that the squad’s three scheduled scrimmages in the pre-season were canceled due to weather.

“It’s not the way we would have liked to start the season,” Waters said after the game. “But this is the first time we have faced live opposition this spring and we were facing a tough Pulaski team.”

“But we have to stay positive and learn from this.”

“Our defense was good for the most part today, we just have to learn to make better adjustments at the plate.”

The Lady Maroons jumped to a 3-0 advantage at the end of the first inning off three hits, a walk and a sacrifice fly off Raider starter Macey Welchel.

Pulaski’s starter, Krystin Wilson, meanwhile, had the Lady Raiders off balance all game with an effective changeup, recording all but two outs throughout the game with a strikeout.

Pulaski would add 4 more runs in the second, then cap off the win with a 7-run third to take the 14-0 lead, while sending 11 batters to the plate.

The Lady Raiders’ lone hit came in the top of the fourth when Grace Jones reached on a two-out single to right.

McCreary’s home opener is scheduled for this afternoon, when they host Casey County. Friday afternoon they travel to North Laurel, then will play Corbin and Southwestern Saturday in Somerset as part of tournament.

They are back on the road Monday against Williamsburg, then will host Whitley County on Tuesday afternoon.