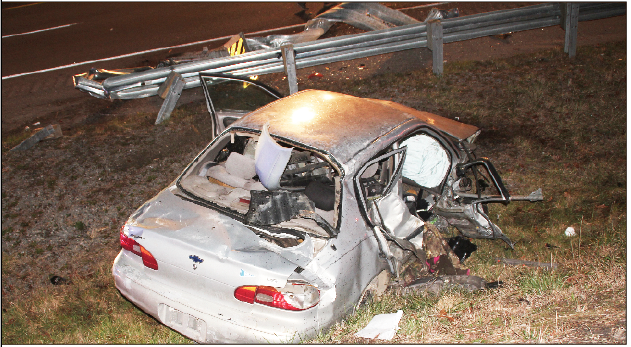 A Scott County woman is lucky to be alive after careening in to a guard rail on U.S. 27 Monday night while leading officers from two states on a pursuit. 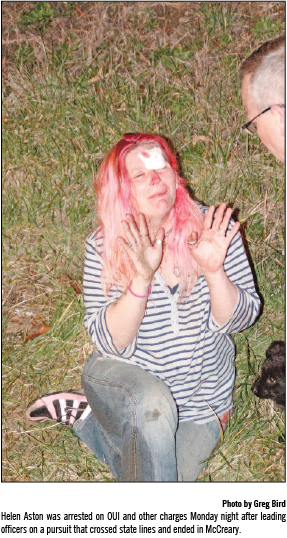 Helen C. Aston, 36, of Oneida faces multiple charges, both in Kentucky and Tennessee as a result of the incident.

The chase began around 11:00 p.m. Monday night when Scott County Sheriff’s deputies spotted the 1999 Chevrolet Prism driving erratically and attempted to make a traffic stop. The driver ignored the officers and proceeded to head north bound at a high rate of speed, nearly striking several vehicles along the way. As she approached the state line, officers requested units from McCreary County to assist with the pursuit.

Kentucky State Police Trooper Harrison Wells, Sargeant Odell Smith of the McCreary County Sheriff’s Department and Constable Bill Hayes responded and were able to get behind the vehicle.

About one mile north of the state line, Aston lost control of her vehicle and struck a guardrail, taking out more than 20 feet of the protective device before coming to a stop.

Remarkably, Aston was not seriously injured in the accident, and was transported to the Lake Cumberland Regional Hospital by Trooper Wells, where she reportedly fought with the arresting officer. She was released early Tuesday morning and lodged in the Pulaski County Detention Center.

She is also facing possible charges in Scott County as well as a result of her actions.

Officers were involved in another pursuit early Sunday morning 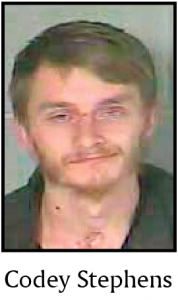 Codey L. Stephens, 20, of Whitley City is facing several charges after refusing to stop for officers around 5:00 a.m. Sunday.

According to the citation, Stephens was observed traveling southbound on U.S. 27 at a high rate of speed, and proceeded to turn on to Valley Road without signaling.

Sgt, Smith and Constable Hayes initiated a traffic stop, but the subject continued to drive away recklessly toward Shirt Factory Road. Fish and Wildlife Sargeant Chris King and Deputy Greg Chaney had established a road block at the intersection of Shirt Factory and Wilburn K. Ross Highway, but Stephens sped through the block, nearly hitting the officers.

A short while later Sgt. Smith used a PIT maneuver to stop the vehicle, but the subject jumped out of the vehicle and fled on foot, where he was apprehended a short time later.

Upon searching the vehicle officers found over 9 grams of marijuana, scales, baggies, a used syringe and two concealed knives.

Stephens was charged with wanton endangerment (police officer), reckless driving, OUI, fleeing/evading (both on foot and in vehicle), possession of marijuana, possession of drug paraphernalia, operating on a suspended license, escape, carrying a concealed weapon and disregarding a stop sign.

He was lodged in the Leslie County Detention Center.