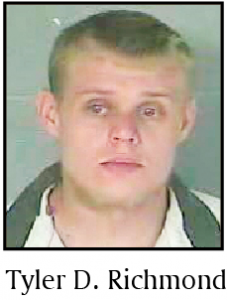 A Pine Knot man is behind bars after authorities say he stabbed another man early Tuesday morning.
Sheriff Randy Waters reported the arrest of Tyler D. Richmond, 23, on charges of second degree assault and alcohol intoxication following the incident.
According to the arrest citation McCreary County 911 received a call about a stabbing victim at the Cobblestone Trailer Park in Whitley City around 12:40 a.m. Tuesday. McCreary County EMS, Sheriffs Deputies Sergeant Odell Smith and Cody Stephens, along with Constable Bill Hayes arrived on scene to find Samuel Stephens suffering from a stab wound in his left side. The injuries were described as life threatening. The knife was recovered at the scene.
Stephens was transported to Lake Cumberland Regional Hospital, then later transferred to the University of Kentucky Medical Center, where he was listed in stable condition.
Two witnesses at the scene state Richmond got into an argument with Stephens, whereupon he stabbed the man and fled the scene on foot.
Constable Hayes found the accused a short time later at the parking lot of Kroger where he was placed under arrest. Richmond told officers he had consumed about seven beers that evening prior to the assault.
Richmond was lodged in the Leslie County Detention Center.