Scenic Railway opens this weekend with CEO Mike Gresham on board 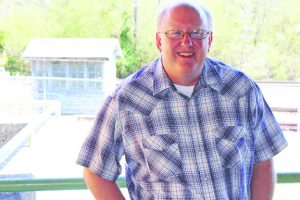 When Michael Gresham was just a Senior in high school, he had no clue his decision to skip Senior Prom in order take a train trip behind a steam locomotive from Lexington to Chattanooga would take him down the railroad tracks by the Stearns, KY Depot Building and foreshadow, by nearly thirty years, his recent arrival in Stearns as the new CEO of the Big South Fork Scenic Railway.
“I passed by this very spot in Stearns on a train at the age of seventeen,” Gresham remarked.  “In a way, it’s almost like coming home.”
Despite being born in Ohio, Gresham has definite Kentucky connections-not only with that early train ride-but with “kinfolk” living in both Corbin and Ashland.   Gresham is definitely looking forward to his upcoming Kentucky experience.
A lifelong rail fan, Gresham got his first train set at the age of three as a gift from his father.  At thirteen, he was an eager rail volunteer learning all he could about local rail history.  At nineteen, he volunteered as an apprentice passenger car mechanic and then bought his first passenger car when he was twenty-one years old.
Soon after buying the passenger car, Gresham enlisted and began a twenty year career of active duty with the Air Force; however, he managed to hang on to his love of the tracks by consulting and doing other work with railways during his spare time.
Retiring from the Air Force in 2012, Gresham began work as a regional manager for Iowa Pacific.  The work kept him busy in several states including Texas, Colorado, California, Oregon, and New Mexico.  Dissatisfied with constant travel and being away from home so much, Gresham decided to focus on one railway as he became the general superintendent overseeing the turn-around of Western Maryland Scenic Railway.
After achieving success with the WMSR, Gresham took time off from work to spend time with his terminally ill father.  Later, he reentered the train world with Austin Steam Train in Texas.
Hiring Gresham to come from Texas to the BSFSRR was a sudden decision made by the McCreary County Heritage Foundation, owner of the railway, after negotiations for a buy-out of the railway by DSRR, LLC collapsed just a few weeks before the opening of the 2017 train season.
Gresham sees the BSFSRR and the extremely short amount of time given to him to get ready for the 2017 opening as challenges.  He is optimistically undaunted.
“There is so much potential with the BSFSRR,” Gresham remarked enthusiastically.  “There’s beautiful scenery and so much history.  It’s a tough, challenging line; however, I love a good challenge.”
Gresham sees his position as CEO at the BSFSRR, along with his additional role as Vice President of Operations at Crossroads Railcar Services in Stearns, as a way to help a community badly in need of economic growth.
“Through my military career, the United States has given me so much more than I deserve,” he commented.  “Being here is a way for me to give back.  There is so much potential for growth.  The BSFSRR is the lynch pin of tourism for Stearns and McCreary County.  It’s the largest attractant to Stearns.  But we need to attract tourists here and get them to stay overnight by offering different things to do.”

Currently, Gresham is busy getting the train prepared for the 2017 opening this weekend on Saturday, April 8.  At least one preparatory run is planned for this week with safety being a priority.
“In addition to meeting mandated safety standards, we have a moral and ethical obligation to be safe,” Gresham emphasized.
The train will open the season with two newly rebuilt cars and five additional cars will be added as they are safely rebuilt.
Gresham is also busy updating technology and eager to add new events once the season is underway.  He also wants to work with the McCreary County Heritage Foundation to see the lighted Stearns Company sign erected again.
This year’s schedule and ticket prices will stay the same as last year.  Acknowledging this year’s late start has been a tough break and recognizing the importance of advance planning with tourism, Gresham is hopeful the 2018 season schedule will be ready for release by this July.
“We’re going to offer people an authentic Kentucky experience in a safe environment,” Gresham explained.  “And we’re going to be adding and growing in the years to come.”