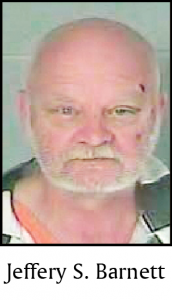 Barnett faces several charges, including OUI, criminal mischief, wanton endangerment and fleeing/evading, after driving away from a traffic stop.
According to Sheriff Waters Deputy Derek Dennis observed Barnett traveling southbound without headlights on US 27 around Flat Rock about 8:30 p.m. Sunday night and pulled the vehicle over.

The Deputy stated he could detect the smell of alcohol on the subject, who would not confirm he had been drinking. Barnett reportedly failed two field sobriety tests, and was told to sit in his vehicle while the Deputy made arrangements for a tow truck.

As Deputy Dennis returned to Barnett’s vehicle to place him under arrest the subject reportedly stated he was going home, started his vehicle and pulled away.

The Deputy initiated a low-speed pursuit, and other units responded in an attempt to stop the suspect.

Barnett turned on to Highway 1651 where Kentucky Fish and Wildlife Sergeant Chris King had deployed spike strips on the road. Barnett ran over the spike strips, flattening three tires, but still refused to stop. In his attempt to keep driving, Barnett reportedly drove around the parked police vehicles and directly at Kentucky State Police Trooper Harrison Wells, nearly hitting him and Sergeant King.

Seeing the disregard for public and police safety, Deputy Tom Smith used his cruiser to block Barnett’s vehicle in the parking lot of the Dixie transport Apartments.

After Barnett was stopped for the second time he refused officers’ orders to exit the vehicle, and had to be removed, but still continued to resist officers’ attempts to place handcuffs on him.

Barnett was lodged in the Leslie County Detention Center.