The owners of a group attempting to purchase the Big South Fork Scenic Railroad have filed a lawsuit alleging the McCreary County Heritage Foundation acted fraudulently when they terminated negotiations last month. 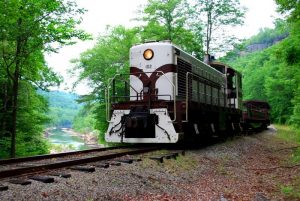 Diana Bybee and Sam Carpenter, owners of Diana Sam Rail Road (DSRR), filed the suit last Friday against the Heritage Foundation and Stearns Properties, L.L.C. in McCreary County Circuit Court.
The suit seeks to force the Heritage Foundation to adhere to the original terms of the Memorandum of Understanding (MOU), to recover costs DSRR incurred while operating the venue and to collect future earnings of the railroad.
In the filing Bybee and Carpenter contend the Foundation never intended to sell the railroad, and instead wanted to profit off the work the company did to make improvements and develop a business plan.
“DSSR now understands and believes that the Heritage Foundation and Stearns Properties never intended to finalize the sale and leases contemplated in the MOU, and never intended to allow DSRR to operate the Scenic Railroad, the Depot or the Shop even if the final transactions documents had been executed,” the suit contends.
“Instead, the Heritage Foundation and Stearns Properties knowingly and intentionally induced DSRR into doing the preliminary work for the upgrade and operation of the Scenic Railroad and the Depot, including the creation of marketing and business plans, and paying for that work, all the while planning to either keep the Scenic Railroad and related properties under their respective control or to sell and/or lease them to another entity, to the damage and detriment of DSRR.”
The filing states the two parties began discussion about the purchase and lease of the railway and associated properties last fall. On December 13, 2016 the MOU was signed, which outlined the plans for DSRR to purchase the Big South Fork Scenic Rail Road for $100,000, and to lease the Depot and locomotive shop.
With the MOU in place, DSRR was provided access to the properties, and they began taking steps to renovate and market the railway.
The suit contends that DSRR contacted the Heritage Foundation several times to finalize the documents, but the Foundation attempted to make changes to the agreement along the way.
The plaintiffs seek to recover the costs associated with the work they performed, including the salaries of employees, the design and printing of brochures, office and site renovations and passenger car repairs and upgrades, during the time they had operated under the MOU.
The lawsuit states DSRR spent more than $175,000 over that period, not including “intellectual capital.”
They are also asking the Court for compensatory and punitive damages as well as any profits made by the railroad due to “ill-gotten gains.”
Additionally DSRR is asking the Court to force the Heritage Foundation to live up to the terms provided by the original MOU and to proceed with the transaction.
In the notice informing DSRR that the Foundation no longer wished to pursue a deal, Chairman of the Board George Wilson III, offered to discuss the possible reimbursement of expenses “which have provided a measurable benefit to the Heritage Foundation.”
Attached as evidence in the filing is a copy of the original Memorandum of Understanding, outlining the original framework of a deal to sell and lease the property.
Of note is the language in the document, which states the MOU is “non-binding.”
“The parties acknowledge that no contractual relationship is created between them by the Memorandum,” it reads. “No provision of this memorandum shall be construed to create rights or obligations of any of the parties.”
The lawsuit acknowledges the phrase, but counters that DSRR performed all their obligations under the agreement and, as such, the MOU has become a binding contract.
No date has been set for a hearing on the case and the Heritage Foundation has not had an opportunity to file a response in court.