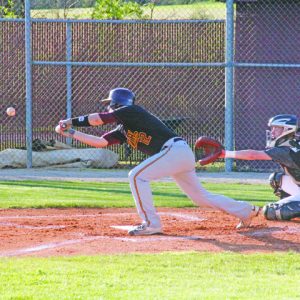 Photos by Greg Bird Justin Trammell helped his pitching with a bunt single that led to a run in the second inning. 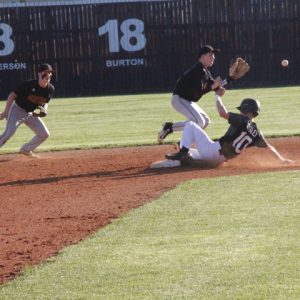 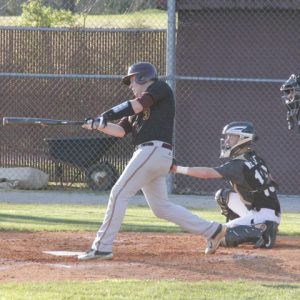 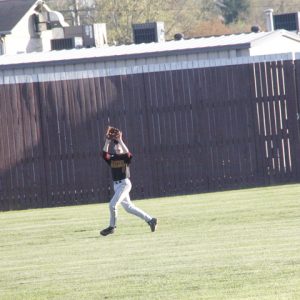 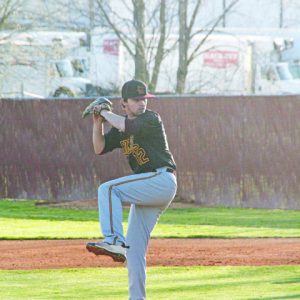 For five and a half innings Tuesday the Raiders had Pulaski County on the ropes. But a walk-off, game winning single in the bottom of the seventh inning gave the Maroons a 3-2 win, ending McCreary’s bid for their first win over PC since 2001.

Justin Trammell pitched an outstanding game against the Maroons, allowing 5 hits, and 2 walks, while striking out 4 and allowing only 2 earned runs.
The Raiders took a 2-0 lead in the top of the second inning, capitalizing on Maroon starting pitcher, Caleb Wright’s control issues.
Zack Chaney and Zech Moore led off the frame by drawing consecutive walks. Trammell attempted a sacrifice bunt to advance the runners, but Pulaski failed to make a play on the ball, loading the bases with no outs. Isaiah Huddleston drove in the first run of the game with a 1-out walk, followed by an outfield error off a fly ball to left off the bat of Grant Hammer to drive in Moore.
The Raiders had plenty of opportunities to expand the lead, getting runners on base in all but the first inning, and putting runners in scoring position with less than 2-outs in four frames. But McCreary was not able to take advantage and plate any additional runs.
Pulaski was held scoreless until the bottom of the fifth, when the lead-off batter reached on a single and advanced to second on an error. After stealing third, he would score on an infield ground-out to pull the Maroons within 1, 2-1.
In the bottom of the sixth Pulaski tied the game after a lead-off double led to a run on a ground out, making the score 2-2.
The Raiders had a chance to regain the lead in the top of the 7th when Kidd and Nathan Goins reached on back-to back singles, but were left stranded to end the inning.
A lead off walk to start the bottom of the 7th came back to haunt McCreary as Pulaski would advance the runner on a steal and a sacrifice, before a fly ball to left ended the game with a walk-off single.

McCreary hosts their next three games at home: Friday against Jackson County, and Saturday against Bell and Cumberland County.