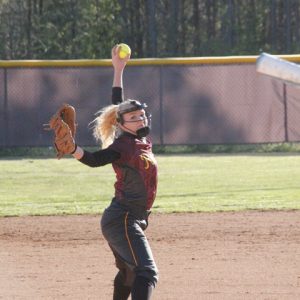 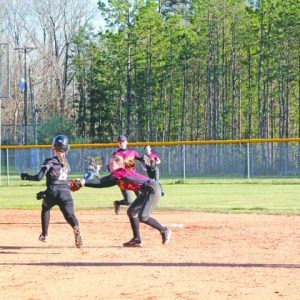 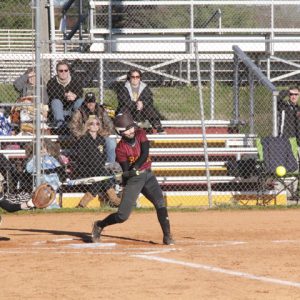 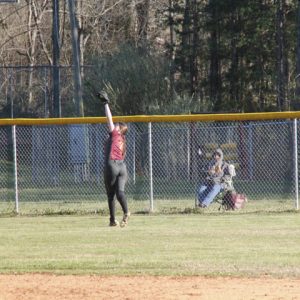 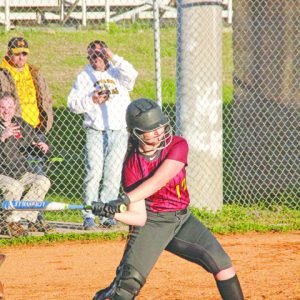 Photo by Greg Bird Macey Welchel is still dealing with injury, but is able to swing the bat.

After the first few weeks of the season the Lady Raider offense has not awakened up from the off-season slumber, leading to a disappointing 0-9 start to the year.
While the defense has been above average, the hitting has been nearly non-existent. Of the first 9 contests, McCreary has scored only 19 runs, 8 of them coming in one of the games, a 9-8 loss to Clinton County last week.

Injuries have also taken its toll on the Lady Raiders. Starting pitcher Macey Welchel has been sidelined as she recovered from a shoulder injury. 8th grader Celya Kiser has been on the mound for the last few games, and has stepped up and has shown she has what it takes to pitch at the varsity level with some more development.

Kiser pitched a strong outing against Clay County last Friday, holding the Lady Tigers scoreless over the first four innings, until hard luck struck in the fifth.
Clay County managed base runners in each of the first four frames, but the Lady Raider defense stepped up, ending each threat without allowing a run, including turning a pair of double plays.

But the Lady Tigers finally broke through in the top of the fifth.
Back-to-back walks to start the frame led to the first of six runs to cross the plate in the inning as Clay County bats started to find the gaps against the McCreary defense. Four consecutive base hits followed, with three of them just barely missing a Lady Raider glove, led to a 6-run outburst in the inning.
Clay County batters were retired in order in the sixth, but a walk, two singles and two errors in the top of the seventh allowed the Tigers to pad their advantage with 3 more runs and a 9-0 lead.

The Lady Raider offense, meanwhile, produced only five base runners all game off three walks and singles by Cammie Gilreath and Taylor Sumner. Only once did a Lady Raider reach second base in the game.

After a week off for spring break, Coach Todd Waters hopes his team can come back healthy and ready to swing the bats.

McCreary’s next game will be Monday, April 17 when they host Williamsburg. The following Thursday they will play in their first official District matchup, hosting Wayne County.