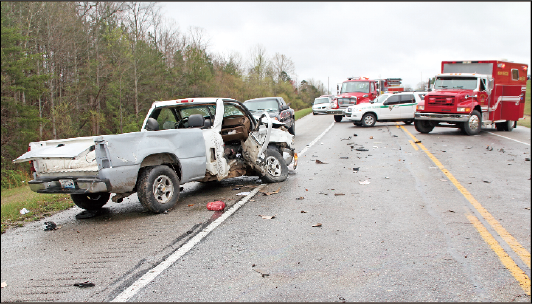 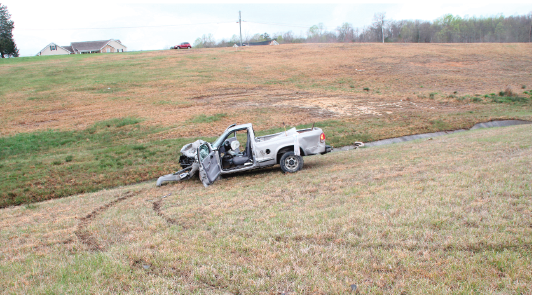 Wet roads contributed to a Thursday afternoon accident that resulted in one person being airlifted and U.S. 27 shut down for more than 2 hours.

According to McCreary County Sheriff’s Deputy Charles Perry, Estill Trammell was traveling northbound around 1:30 p.m. when traffic slowed in front of him to turn in to Daugherty’s Drug Store. Trammell applied his breaks, but the pickup hydroplaned on the wet road and spun into oncoming traffic where he was hit by a southbound vehicle driven by Luther Switzer. Trammell was ejected from his vehicle upon impact and was airlifted to the University of Kentucky Medical Center. Switzer was transported by McCreary County EMS to the Lake Cumberland Regional Hospital for treatment.

A third truck, pulling a trailer carrying a UPS delivery van, swerved to avoid the collision and ended up in the ditch, but the driver was unharmed.

The road was closed for about 2 hours to clear debris and traffic was re-routed.
Members of the Pine Knot Fire Department assisted at the scene.