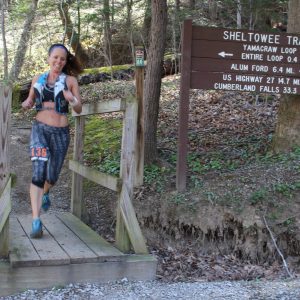 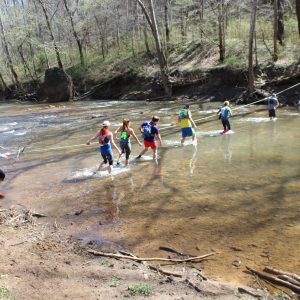 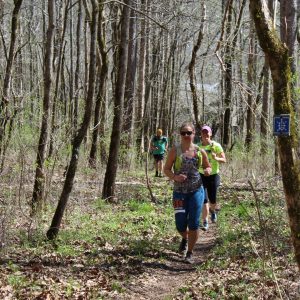 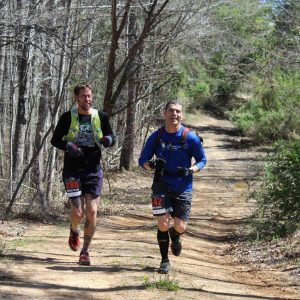 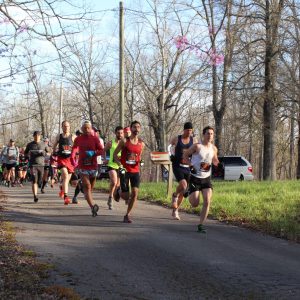 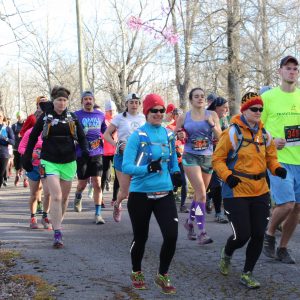 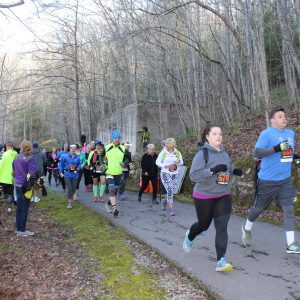 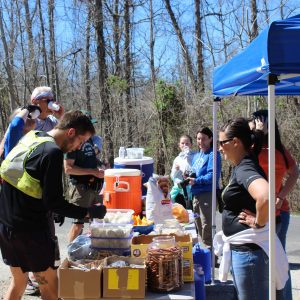 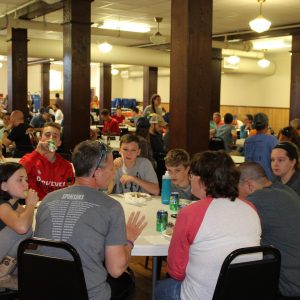 For the slew of eager racers converging on McCreary County last weekend to compete in the third annual Yamacraw Run, the weather and natural beauty of the county were difficult to beat.  With redbuds, dogwoods, and wildflowers blooming in abundance along creek banks and wooded trails, blue skies beaming with sunshine, and temperatures climbing to the upper 60s, it was a perfect day for those participating in the 50k, 20k, and 10k Yamacraw races.   Participants in all three races crossed the finish line at Blue Heron with 10k (just over 6 miles) runners also beginning their competition at Blue Heron.  50k (just over 30 miles) and 20k (just over 12 miles) racers began their extended treks at the Lick Creek trailhead in Dixie.  50k runners pounded out their lengthy adventures by racing from the Lick Creek Trailhead to the Big South Fork River, turning right to Alum and Yahoo Falls, travelling back down the river to Yamacraw, crossing the chilly waters of Rock Creek on the Sheltowee Trace, veering upward to Bald Knob and Ledbetter before finally crossing the Blue Heron coal tipple bridge and finish line.

The Yamacraw Run is an annual event held in McCreary County’s Daniel Boone National Forest and Big South Fork National River and Recreation Area.  The event is organized and hosted by Ultranaut Running, a small, grass-roots organization in Knoxville, TN dedicated to the sport of trail running, along with the support of additional sponsors including the presenting sponsor, McCreary County Tourism.   Other local sponsors listed on the Yamacraw website include the Big South Fork Scenic Railway, Knife of the Party, Kristina’s Kitchen, Outdoor Venture, Huddle House, and Highland Telephone Cooperative.  In addition, the McCreary County Heritage Foundation provided use of the Heritage Hall at no cost for pre and post-race events along with free train ticket/Museum admission to racers.  McCreary County EMS, law enforcement, and search/rescue provided assistance at no cost to race organizers.   Several local volunteers assisted with hospitality stations, trail sweeps, emergency communications, and other tasks.

Local motels reported a bump in business on Friday night prior to the races on Saturday with most out-of-town participants departing after the races.  Yamacraw participants represented a variety of states and various counties throughout Kentucky.  Racers in the event registered in advance and paid registration fees ranging from $35.00 to $90.00 depending on the length of race entered and date of registration.  Slightly more than 550 racers completed the 2017 Yamacraw Run with 261 of those entrants completing the 50k.

Yamacraw 2018 is scheduled for April 7, 2018.  The premiere of Yamacraw’s sister race, No Business Hundred (NB100), is scheduled for October 14, 2017.  The NB100 is a 103.6 mile loop course through Kentucky and Tennessee in the Big South Fork National River and Recreation Area.  Like the Yamacraw, NB100 is organized by Ultranaut Running with McCreary County Tourism as one of its sponsors.