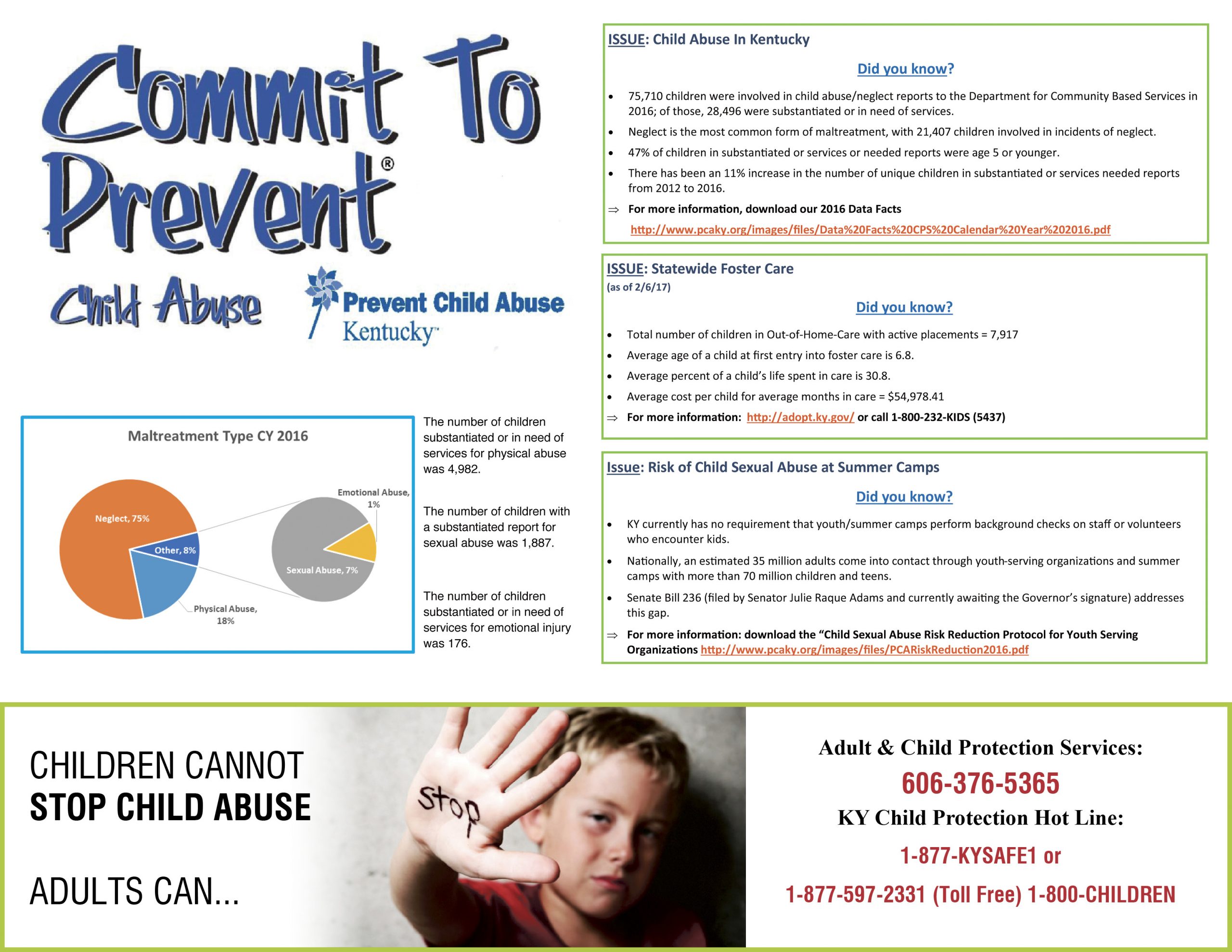 In January of 2014, four-year-old Myls Dobson died in a New York City apartment from injuries sustained after days of abuse by his caregiver. Janaie Jones admitted to burning Myls, beating him with belts and hangers and keeping him locked up and alone in the bathroom for long, extended periods of time. Jones said this was all just a form of corporal punishment to control the young boy.

In another horrifying instance of child abuse, a couple from Monroeville, Ind. were arrested the same month and charged with felony child neglect after several of their children were left in a frigid van parked outside of a motel. The remainder of the children were zip-tied to a chair in a motel room.

Stories like these may be shocking, but unfortunately they are not rare. The organization Child Help says a report of child abuse or neglect is made every ten seconds in the United States. Every year, more than three million reports of child abuse are made, and around four to seven children die each day due to neglect and abuse. Child abuse occurs at every socioeconomic level, across ethnic and cultural lines, within all religions and at all levels of education.

While many cases of abuse are discovered and reported, it’s likely that many more are not. It is estimated that between 50 and 60 percent of child fatalities due to maltreatment are not recorded as such on death certificates. Third-party observers may be unaware abuse is taking place until it is too late.

Child abuse can be hard to distinguish, but certain visual clues or changes in behavior may indicate there is a problem. The Child Abuse Prevention Center and other organizations offer these signs of child abuse or neglect.

• There may be visible signs of injury, including bruises or burns.

• Abused children may appear scared or anxious. They may also seem withdrawn or depressed. However, abused children also may act like nothing is wrong or become “class clowns” in an attempt to avoid unpleasant feelings.

• Some abused kids may fear going home or to places where they may be abused.

• Changes in school performance may indicate a problem. Some children will fall behind on work or have difficulty concentrating. Others may do especially well on tests or be obsessive about getting good grades for fear of punishment.

• Abused and neglected children may suffer from a lack of personal care or hygiene. Clothing may not be appropriate for the weather or appear dirty.

• Abused kids could have sleep disturbances that cause them to appear tired.

• Behaviors such as bed-wetting, thumb-sucking or other habits of early childhood may be brought on by abuse. Some children may have memory problems or stop speaking.

• Children who are abused may balk at normal, appropriate touch. They may not be able to distinguish between good and bad touch.

• Risk-taking behavior may be present in abused children. The youngsters may be testing their minds and bodies to extremes or looking for another form of escapism.

• Children who have been sexually abused may exhibit overly sexualized behavior or use explicit sexual language.

If you have concerns that abuse is taking place, report your feelings to a local or state child protective service agency or the police precinct. Doing so could save a child’s life.

The Centers for Disease Control and Prevention say that obesity now affects 17 percent of all children and adolescents in the United States, which is triple the amount of children from just one generation ago. The CDC does say that while rates have been increasing steadily, as of December 2012, obesity has fallen for the first time in quite a while. Obesity numbers are not very encouraging in Canada, either. Using World Health Organization standards of measurements, 31.5 percent of 5- to 17-year-old children in Canada are classified as overweight or obese. Body mass index, or BMI, is a ratio used to determine whether a child is overweight or obese. It is calculated using a child’s weight and height. While BMI is not a direct measure of body fat, it is a reliable indicator of rates of overweight in most children and teens. Overweight is defined as a BMI at or above the 85th percentile on the chart. Obesity is defined as a BMI at or above the 95th percentile. Children who are obese are more likely to remain so into adulthood, a troubling notion when considering the link between obesity and various health problems. Asthma, high blood pressure, high cholesterol, fatty liver, gastro-esophageal reflux and type 2 diabetes are just a few of the conditions linked to being overweight or obese. Though much of North America is facing an obesity epidemic, certain areas have higher rates than others. A new study by the Trust for America’s Health and the Robert Wood Johnson Foundation suggests that obesity rates will only get worse and that by 2030, rates of obesity and overweight may tip the 50 percent mark for much of the United States. Michigan, Kentucky, West Virginia, Louisiana, and Ohio are states that already have obesity rates around the 30 percent mark, while Mississippi is at roughly 35 percent.

“We are pleased and excited to be recognized for achieving national standards that foster effectiveness and promote continuous quality improvement,” Shawn Crabtree, Executive Director, of the Lake Cumberland District Health Department (LCDHD). “The accreditation process helps to ensure that the programs and services we provide are as responsive as possible to the needs of our community. With accreditation, LCDHD is demonstrating increased accountability and credibility to the public, funders, elected officials and partner organizations with which we work.”

The national accreditation program, jointly supported by the Centers for Disease Control and Prevention and the Robert Wood Johnson Foundation, sets standards against which the nation’s nearly 3,000 governmental public health departments can continuously improve the quality of their services and performance. To receive accreditation, a health department must undergo a rigorous, multi-faceted, peer-reviewed assessment process to ensure it meets or exceeds a set of quality standards and measures.

“Whenever you see our seal of accreditation, you will know that LCDHD has been rigorously examined and meets or exceeds national standards that promote continuous quality improvement for public health,” Crabtree said. “By continuing to improve our services and performance, we can be sure we are meeting the public health needs of those we serve as effectively as possible.”

Public health departments play a critical role in protecting and improving the health of people and communities. In cities, towns, and states across the nation, health departments provide a range of services aimed at promoting healthy behaviors; preventing diseases and injuries; ensuring access to safe food, water, clean air, and life-saving immunizations; and preparing for and responding to public health emergencies.

“Achieving accreditation indicates that LCDHD is dedicated to improving and protecting the health of the community by striving to continuously improve the quality of the services it delivers,” said Ray (Bud) Nicola, MD, MHSA, chair of PHAB’s Board of Directors and affiliate professor at the University Of Washington School Of Public Health in Seattle. “Accreditation also promotes consistency in meeting standards. With an ever-increasing number of health departments now applying for and becoming accredited, you will be able to expect to receive the same quality of public health services wherever you go in the United States.”