The McCreary County Board of Education will be holding a public hearing tonight (Thursday) to hear comments from members of the community regarding a proposed property tax increase. 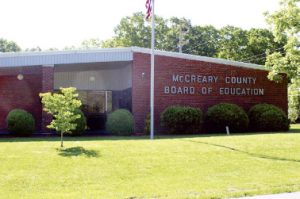 The McCreary County Board of Education will be holding a public hearing tonight (Thursday) to hear comments from members of the community regarding a proposed property tax increase.

Scheduled for 6:00 p.m. in the Central Office, the hearing is a legal requirement for the Board as they are being asked to consider a “nickel” tax increase for the coming year.

According to McCreary County Schools Superintendent Mike Cash, the property tax rate would increase from 41.9 cents per $100 of assessed value to 47.7 cents, generating approximately $386,000 in additional revenue for the District.

More importantly, Cash added, the move would allow for additional funding from the State – about $740,000 in matching funds – a one-time allocation to school districts who adopt the nickel tax for the year.

The revenue gained, both locally and from the State, would be dedicated to much needed construction projects, such as putting new roofs on the high school and Pine Knot Primary, repair to the roof at Whitley City Elementary, the addition of a new wing at McCreary Middle School and possibly the construction of a new Bus Garage.

Additional funding could also go toward the purchase of new school busses as the District is attempting to completely replace the aging fleet over the next decade.

The increase would also raise the bonding potential of the School District from about $1.2 million to about $13 million, allowing for the needed construction projects to move forward.

In an interview last week Cash stressed the revenue gained from the nickel tax would strictly be dedicated for construction and related projects, with not one cent being used for salaries.

By state law, any revenue generated from the nickel tax must be dedicated to the building fund. After the first year, if there are no other changes to the tax rate, the funding from that point forward do not have to be dedicated toward construction.

After the hearing the Board of Education is scheduled to meet in their regular monthly session at 6:30 p.m. where the proposed increase is expected to be presented and voted upon.

Should the Board vote to accept the tax, it is subject to a possible public recall vote. If a petition is submitted, with signatures of at least 10 percent of the total voters in the last Presidential Election – about 578 names – to the McCreary County Clerk’s Office within 45 days of the Board’s approval of the tax rate a special election could be warranted.

If enough verified signatures are obtained and the deadlines are met, a special election could be held for a county-wide vote to either approve or reject the tax rate.