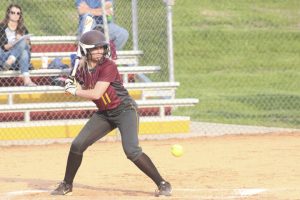 Photos by Greg Bird Celya Kiser at the plate. 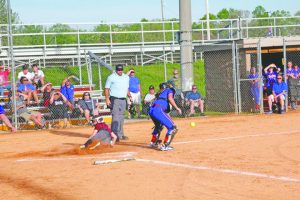 Emily Simpson slides in to home.

The Lady Raiders got their much-needed first win of the season Friday afternoon as they shut-out the Clinton County Lady Bulldogs, 10-0.

McCreary was buoyed by Emily Simpson and Grace Jones, who combined for 5 of the team’s 7 hits and 5 runs batted in.

Macey Welchel allowed only 3 hits over five innings of work, while striking out 4.

The Lady Raiders jumped on Clinton County early, scoring 5 runs in the bottom of the first.

In the bottom of the second a single by Simpson led to another run as she scored on a fly out to center field.

The Lady Raiders added 3 more runs in the third. Celya Kiser drew a walk, stole second and scored on a Jones single. Bradley Powell, running for Jones, would cross the plate on a ground out. Abby Perry then singled and scored on a Simpson sacrifice.

McCreary closed out the game in the bottom of the fifth.

Anderson and Simpson led off by drawing walks, and a Clinton County error allowed the final run to cross the plate for the 10-0, 5 inning win.

The win was the Lady Raiders first win of the season, after starting the year 0-13.

The Lady Raiders host Lynn Camp Thursday and travel to Knox County on Friday. Next Monday they travel to Lynn Camp and host Casey County Tuesday.